This last week has been devastating, but also incredible and historic. The relationship between Indigenous nations and the colonial state is changing before our eyes as indigenous people across Turtle Island rise up with power, determination, and leverage.
As Indigenous people rise, racialized people, indigenous peoples displaced from their territory that now reside on Turtle Island, and Canadian settlers are joining in solidarity.
Solidarity actions keep going at remarkable pace and spreading far and wide continuing to demand that the RCMP leave Wet’suwet’en lands and that Wet’suwet’en law be respected. Today actions happened all over so called Canada, including Indigenous youth successfully shutting down the BC government in Victoria, mass protests in downtown Toronto, and the rail lines being shut down by in Chiliwack BC!
While not a Wet’suwet’en action, the deeply related 29th annual Women’s Memorial March in the Downtown Eastside saw thousands of people march to honor lost loved ones, including far too many missing and murdered Indigenous women, and commit themselves to justice.
This movement is powerful and shows no sign of slowing down. Seize the moment! You all are making history and standing on the side of justice.
Photo from today’s powerful Women’s Memorial March in the Downtown East Side
EVENTS
VANCOUVER
Saturday at 10 AM at John Hendry Park Trout Lake at 10 AM
TORONTO
Saturday at 10 AM sharp at Matt Cohen Park. Emergency Action to Stop RCMP Invasion of Wet’suwet’en Territory!
VICTORIA
Saturday at 11:30: Stolen Sisters Memorial March
(Not a Wet’suwet’en action but another important march to honor Missing and Murdered Indigenous Women)
SEATTLE
Sunday at Noon at Seattle Center Main Stage

University of Windsor students staged a protest on Thursday in support of the Wet’suwet’en nation in British Columbia currently embroiled in a natural gas pipeline conflict.
Approximately 50 university students walked out of classes, marching throughout Windsor’s downtown core. They were joined by university faculty and staff members.
The protest was organized by University of Windsor law students after they received emails and other messages from general students asking what can be done to support Wet’suwet’en protestors across the country.
“This literally was born overnight,” said Valeria Kuri, president of the Shkawbewisag Student Law Society at the University of Windsor. “A few nights ago, we released an official statement on behalf of Shkawbewisag Student Law Society and the response has been pretty overwhelming.”
Kuri added that a number of professors also cancelled classes in support of Thursday’s protest.
For her part, University of Windsor assistant law professor Beverly Jacobs said she was proud of her students for taking a stand and protesting.
“They’re learning Canadian law, and Canada isn’t following its own law,” she said.
“It’s happening everywhere. It’s happening around the world. So it’s time for all of us to stand up.”
Michelle Nahdee, coordinator of Indigenous Legal Studies at the university’s Faculty of Law, said she took part in Thursday’s protest to support students who organized the march.
“I see our future lawyers as decision-makers,” she said. “Seeing more and more come in and being open-minded and respectful of Indigenous legal orders shows that there could be change within the system.”
“We have many students within our faculty that have open minds … and they are accepting and very knowledgeable of Indigenous legal orders themselves — even if they’re not Indigenous.” 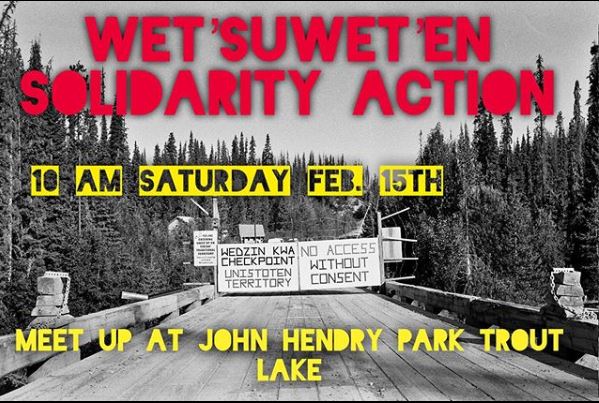 Protests across Canada continued Wednesday in solidarity with Wet’suwet’en First Nation hereditary chiefs and land defenders fighting against a fracked gas pipeline that would cut through their unceded territory in northern British Columbia.
For more than a year, Royal Canadian Mounted Police (RCMP) raids on camps established by Indigenous people to protest construction of TC Energy’s Coastal GasLink pipeline have garnered global headlines and inspired solidarity actions around the world.
Such demonstrations in Canada have ramped up over the past week since police launched a violent pre-dawn raid targeting land defenders last Thursday.
The RCMP raids have come in response to injunctions against Wet’suwet’en blockades granted by Canadian courts. In recent days, Indigenous protesters and their allies have gathered at government buildings and Coastal GasLink offices and shut down ports, railways, streets, and Vancouver’s Granville Street Bridge to support Wet’suwet’en hereditary chiefs who say that the pipeline company is trespassing on their land.
“We’ve been resisting for 500 years and we’ll be resisting for 500 more if that’s what it takes to earn the respect and have a real nation-to-nation relationship,” Cricket Guest, an Anishinaabekwe Métis who demonstrated with Indigenous youth and climate change activists in Toronto Tuesday, told The Toronto Star.
Guest called the traffic and shipping disruptions in multiple provinces “absolutely necessary” to draw attention to how the Canadian police and government have treated the Wet’suwet’en land defenders, declaring that “reconciliation is dead and we will shut down Canada until Canada pays attention and listens to and meets our demands.”
Demonstrators’ demands, according to the Star, “include implementing the United Nations Declaration on the Rights of Indigenous Peoples at the federal level, suspending the court injunction against blockades of the Coastal GasLink, and calling on the RCMP in the region to stand down.”

Protests Continue Across Canada in Solidarity With Wet’suwet’en Land Defenders Fighting Fracked Gas Pipeline. Demonstrations over the past week have halted traffic in downtown Vancouver and shut down railways throughout the country. byJessica Corbett, Common Dreams, 2.13.2020