Some of us have been discussing how to address rising sea levels, and what to do about the resulting climate refugees.  Overground Railroad Facebook group.

Most people are not aware of how quickly sea levels are rising, and the urgency to plan accordingly.

An article on MSN News today shows the projected water levels of numerous cities in the year 2100:

“Even small increases can have devastating consequences, according to climate experts. If the worst climate-change predictions come true, coastal cities in the US will be devastated by flooding and greater exposure to storm surges by the year 2100.

Research group Climate Central has created a plug-in for Google Earth that illustrates how catastrophic an “extreme” sea-level rise scenario would be if the flooding happened today, based on projections in a 2017 report from the National Oceanic and Atmospheric Agency.

You can install the plug-in (directions here) and see what might become of major US cities.” 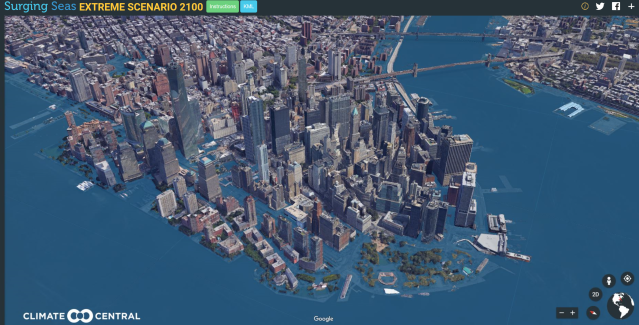 2 Responses to Sea Level Projections for 2100