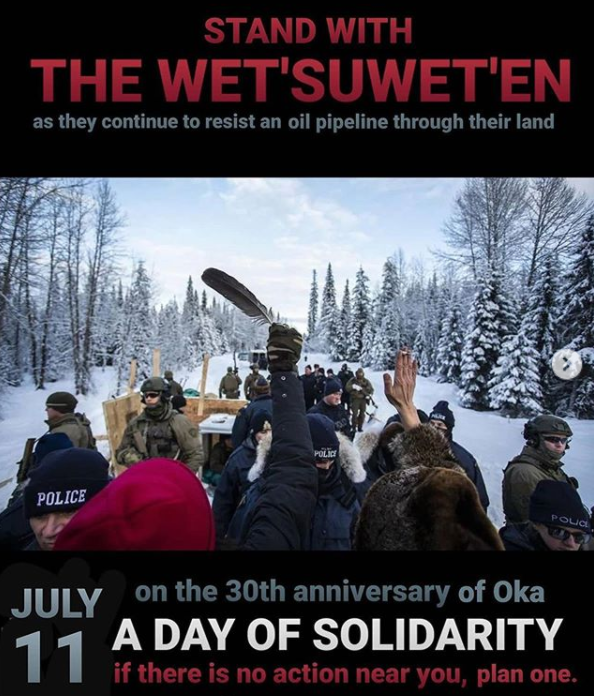 Kanehsatà:ke is the oldest Kanien’kehá:ka community today and existed pre-European contact. It was the first community to accept Kaianera’kó:wa (the Great Law of Peace), and is mentioned in the condolence (Hi Hi) ceremony of a chief and clan mother. The town of Oka developed along the Lake of Two Mountains through the fraudulent sale of land of the Kanien’kehá:ka community of Kanehsatà:ke by the Sulpician order who were ‘blue bloods’ from France. The Sulpicians sold off land to French settlers and were the biggest land owners in the region. Since 1717, with the arrival of Sulpician priests with their Mohawk, Nippising and Algonquin Christian converts, the Mohawk have been contesting the Sulpician land claim, arguing that the King of France, Louis XIV, never owned the land and thus France did not have the right to grant the land to the Sulpician Order .[9] Included in these lands is a pine forest and cemetery long used by the Mohawk which exists today. The Mohawks of Kanehsatake have tried many times to resolve the land dispute (as part of their land claim against the government and Sulpician mission) but were rejected by the Crown on technical issues.[citation needed]

In 1990 the town of Oka unilaterally approved plans to expand their 9-hole golf course to an 18-hole course and build. The Mohawk protested formally, because they considered the land to be sacred. The city persisted in letting the developer proceed in spite of protests from the community and in response, the Mohawk barricaded a secondary dirt road leading in the pines slated for development to prevent the developers from cutting any trees.[7] After 3 injunctions against the barricade and efforts by the Mohawks to place a moratorium on development, the Sureté du Quebec (SQ), raided the barricade in the early morning hours of July 11, 1990. The SQ were joined by a para-military squad composed of Canadian army and Montreal police. This was the beginning of a 78-day standoff between the Mohawk Nation and their allies (both aboriginal and non-aboriginal) against the SQ and Canadians Army. The sister Mohawk community of Kahnawake erected a barricade on the Mercier Bridge on the South shore of Montreal in order to protect the people of Kanehsatà:ke from a second raid. Negotiations between the Mohawk nation and the Quebec and the Canadian government did not resolve the land issue and it was demonstrated by the International Federation of Human Rights, based in Paris, France, that both the provincial and federal government did not act in good faith during negotiations.[citation needed]

Oka requested support from the Sûreté du Québec, who barricaded highway 344 leading to Kanehsatà:ke. In the first days of the confrontation, a police officer was killed in an exchange of gunfire with the protesters. In solidarity, Mohawk in Kahnawake blockaded the approach to the Mercier Bridge over the St. Lawrence River; this route passed through their land. Non-Mohawk residents of the area became enraged about traffic delays in trying to get through this area and across the river.

The Quebec provincial government requested support from the Canadian Army, which sent in 3700 troops.[10] Provincial and national leaders participated in negotiations between the Mohawk and the provincial government. The Mohawk at Kanehsatà:ke were forced by the Canadian army to remove their barricades.[7] Police and military forces pushed the remaining protesters back until they were confined to the Onentokon Treatment Centre and surrounded by the military. Throughout the summer the community of Kanehsatà:ke had their food, medicine and supplies systematically refused and spoiled by the SQ and Canadian Army.[citation needed]

In the end they chose to come out of the treatment centre, although they did not formally surrender.[7] Those who remained at the treatment center were immediately arrested, with the men and women separated and sent to the Farnham army base. Some of these events and history are explored in Alanis Obomsawin‘s documentary film, Kanehsatake: 270 Years of Resistance (1993). All the Mohawks arrested from the Treatment Center regarding the issue of the barricades were acquitted. A separate trial for a number of individual Mohawks were tried and convicted for criminal acts committed before the army moved into the community.

As of 2019, the land dispute continues is still ongoing.

This entry was posted in Indigenous, revolution, solidarity, Uncategorized, Wet’suwet’en. Bookmark the permalink.