I was very happy to hear from Eugenio from the Monteverde Friends School this morning. But saddened to be reminded of the struggles in that part of the world, and the death of Jefry Rivera. Many Indigenous people are begin killed for defending their land and ways of being.

I want to appreciate your continuous dedication to write and share the day to day news about what is going on with the Wet’ suwet’ en First Nation and all the people in Canada moving to support their life, their home place.

I have shared some of this news at the worship Meeting at Monteverde Friends School.

This comes together with what has been going on in Honduras, Nicaragua and Costa Rica for a long time. In January 6 campesinos from indigenous Mayagna ethnia in Nicaragua, (https://es.mongabay.com/2019/09/nicaragua-reserva-bosawas-ganaderia/) were killed by new ‘settlers’ who want to take their land). In the past week Jefry Rivera, one young leader from the Boran community, Cabecar nation of Talamanca Costa Rica was killed for defending his people from similar situation. Although this adds more sad news, I think that sharing is one way of making ourselves and others aware of the strength growing out of supporting each other, where ever we live.

This forest in Nicaragua has fertile land, which is attracting farmers. Land is being cleared for agriculture in the Bosawás Biosphere Reserve, even though it’s not legal. According to Nicaraguan law, these lands are titled to the indigenous Mayagna and Miskito people, and cannot be sold to individuals. But indigenous communities report land traffickers are selling their land. These intrusions are leading to the rapid disappearance of forest within the reserve. In 2000, 15% had been cleared for agricultural use. By 2019, that number climbed to 31%. For the first time deforestation has reached the center of the reserve.

My friend Daniel told me: In Argentina we have a similar situation with the “wichis”… very sad…

Beautiful recap of our Chiefs’ voyage on Mohawk Territory with Chief Woos’ reflections on the importance of this moment for all people. All our love and solidarity to our Mohawk brothers and sisters, this is the beginning of a long and fruitful friendship.

Victoria Redsun, a Dene and Cree, Winnipeg based artist speaks about being arrested at the Unist’ot’en Camp

“I went to Unist’ot’en in the summer for the youth art camp, and I recognized the healing of the land, and it really angered me and hurt me deep inside seeing the CGL workers and RCMP going through the territory. I asked the matriarchs of the territory if I could come back for the Winter. I decided to come back after learning that the Wet’suwet’en speak a similar dialect to the Dene and I recognize them as my relatives, so I saw this as an ancestral fight that I needed to fight.”

White supremacist vigilante groups have put a call out for people to use violence against blockades throughout the country today. If there is an ongoing blockade or action in your area numbers are needed to keep people safe.

Two Sons of Oden members approached the BC legislature yesterday evening and then surrounded it with trucks honking their horns. Bomb threats have also been made against the Unist’ot’en and Tyendinaga Mohawks.

The Indigenous youth occupying the BC legislature have put a call out for people to stand with them throughout the day today.

While this is incredibly upsetting people are not standing down and new actions are happening every day. It is imperative that people show up and stand in solidarity with the indigenous people on the front lines making sacrifices and standing in harms way for what is right. 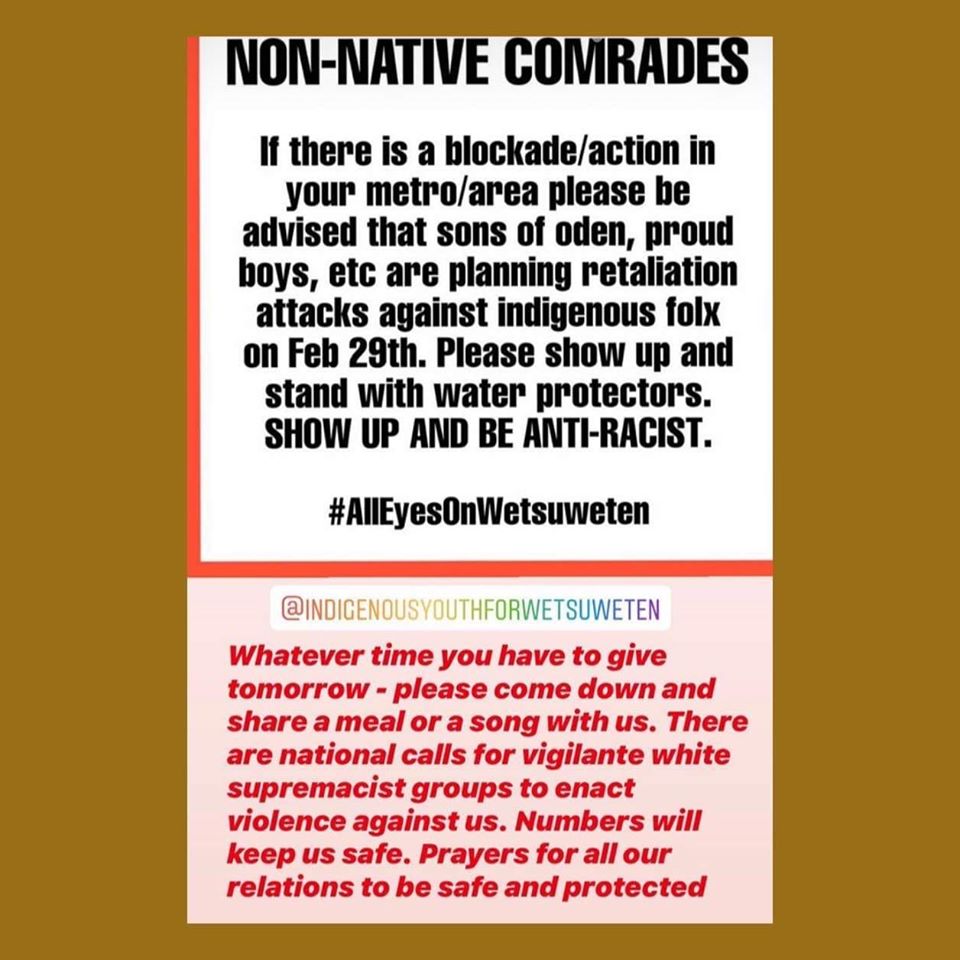