Quakers are my spiritual community. Lately I’ve been writing extensively about the Wet’suwet’en peoples in Canada. But I haven’t adequately explained why this is so important to me. And why I pray Friends (Quakers) will be led to learn about and act on these concerns too.

When I began to know some native people I immediately felt a spiritual connection with them. I believe it is important for Quakers to make connections with Indigenous peoples (as I’ve written a lot about on Quakers, social justice and revolution). I pray that Friends who don’t yet have relationships with native peoples can begin to do so.

I was blessed to be able to make friends with some native people when a small group of us walked along the path of the Dakota Access Pipeline, from Des Moines to Fort Dodge, Iowa. It took us eight days of walking together and camping to cover that 94 miles. The many hours of walking allowed us to share our stories with each other. The First Nation-Farmer Climate Unity March achieved its objective of creating a new community that could work together on issues of shared concern.

There are a many reasons I’ve been studying, praying and writing about the Wet’suwet’en peoples and their courageous stands to protect their unceded land. The current threat is a proposed natural gas pipeline that would cut through their territory. As soon as I saw the pictures of the beauty of those lands I felt a deep spiritual, visual connection, just like the one I had in my youth when I saw the Rocky Mountains. The terrible internal vision of my beloved Rocky Mountains obscured by clouds of smog set the course for the rest of my life, to work to protect Mother Earth. My new terrible vision is of the beautiful Wet’suwet’en land violated by pipelines (more than one is planned).

This video, INVASION, shows the glorious Wet’suwet’en lands as well as being a good introduction to what is going on there now.

As I recently wrote (Our Last Best Hope):

“This moment requires that we return to Indigenous ways of living for each other and honoring the earth.
Indigenous peoples around the world have never stopped working and dying to preserve their ways. That is what Standing Rock and the struggles of the Wet’suwet’en people are about.
This is our moment of truth. We each have a choice. Will we do nothing and continue down the path of environmental devastation and social collapse? Or will we recognize this is our last best hope? Will we act in solidarity with Indigenous peoples, with the Wet’suwet’en?”

What I’ve been praying a lot about lately is what should Quakers do? Will we act in solidarity with Indigenous peoples, with the Wet’suwet’en?”

One thing Quakers can do is to learn about what is going on in the Wet’suwet’en territory now. Because of the lack of, or bias of the mainstream media, one thing we are being asked to do, acting in solidarity, is share the stories, photos and videos coming from the Wet’suwet’en websites, such as:

What do I mean when I say this moment requires that we return to Indigenous ways of living for each other and honoring the earth? This is the question I want to explore in detail, but need to pray more about (and this blog post has gotten too long).

What I hope to explore further are parallels between Indigenous and Quaker cultures. About how Friends should examine their own lives in light of our testimony related to simplicity for example.

What I do know is we White people must act in parallel with native peoples, not get mixed up with their cultures. The following describes the Two Row Wampum Belt (from 1614).

The Guswenta: Two Row Wampum Belt is a Symbol of Sovereignty

This belt symbolizes the agreement and conditions under which the Haudenosaunee welcomed the newcomers to this land.

“You say that you are our father and I am your son.”

This wampum belt confirms our words. These two rows will symbolize two paths or two vessels, traveling down the same river together.

One, a birch bark canoe, will be for the Indian People, their laws, their customs and their ways.

We shall each travel the river together, side by side, but in our own boat.

Neither of us will make compulsory laws or interfere in the internal affairs of the other.

Neither of us will try to steer the other’s vessel. 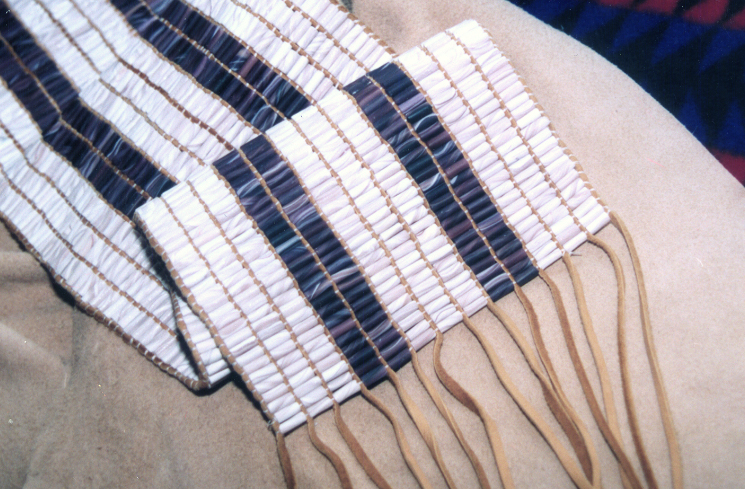