Indigenous Youth have re occupied the BC Legislature

It seems now that talks between the Wet’suwet’en hereditary chiefs and the provincial and federal government will happen, after earlier reports that they would not.

Wet’suwet’en hereditary chiefs and ministers from the B.C. and federal governments are scheduled to meet Thursday afternoon to discuss the First Nation’s title and land rights amid an impasse over the issue, first sparked by the Coastal GasLink pipeline project.
Chief Na’Moks, one of several hereditary chiefs opposed to construction of the pipeline across Wet’suwet’en traditional territories, said talks are set to be held at a hotel in Smithers, B.C., and continue Friday.
B.C. Minister of Indigenous Relations and Reconciliation Scott Fraser said he’s eager to find a “path forward.”
“Finding a peaceful resolution to the situation we’ve found ourselves in over the last weeks is key and paramount, but it is deeper than that,” he said at the B.C. Legislature before leaving to fly north on Thursday.
Fraser stayed in Victoria on Thursday morning for a budget vote, but said he would arrive in Smithers well before the meeting is scheduled to begin.
“The issue of rights and title — we are committed with the Wet’suwet’en people to get that straightened out and to be able to recognize those,” he said.

Powerful actions and a widespread will to struggle against injustice have proliferated in response to the raid on Tyendinaga as anger grows at the Government’s use of force and steadfast refusal to negotiate in good faith.

The Government’s demand that blockades end for talks to begin illustrate how powerful this movement is and how afraid they are of widespread and sustained Indigenous resistance. The Wet’suwet’en Hereditary chiefs have asked for people to continue to act in support of their demands.

The last two days have been incredibly powerful as people have risen up in defiance of colonial injunctions and set up new rail and road blockades across the country: Over 500 people shut down rail traffic in Toronto, The Port of Vancouver was shut down for over 24 hours, Kahnawake Mohawks reinforced their barricades in response to an injunction, Indigenous youth retook the BC Legislature vowing to stay until Nation to Nation talks occur, and new rail blockades went up in Chase, Abbotsford, Maple Ridge, Hamilton, Gitxsan territory, Lennoxville among many other incredible actions.

See photos below of this powerful and expanding resistance.

As police begin to act more aggressively towards new blockades many people have made tactical temporary retreats avoiding arrests and setting themselves up to continue to struggle in a sustained fashion.

As the Government refuses to move an inch continuing the resistance is critical! 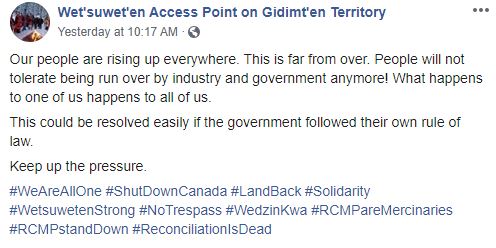 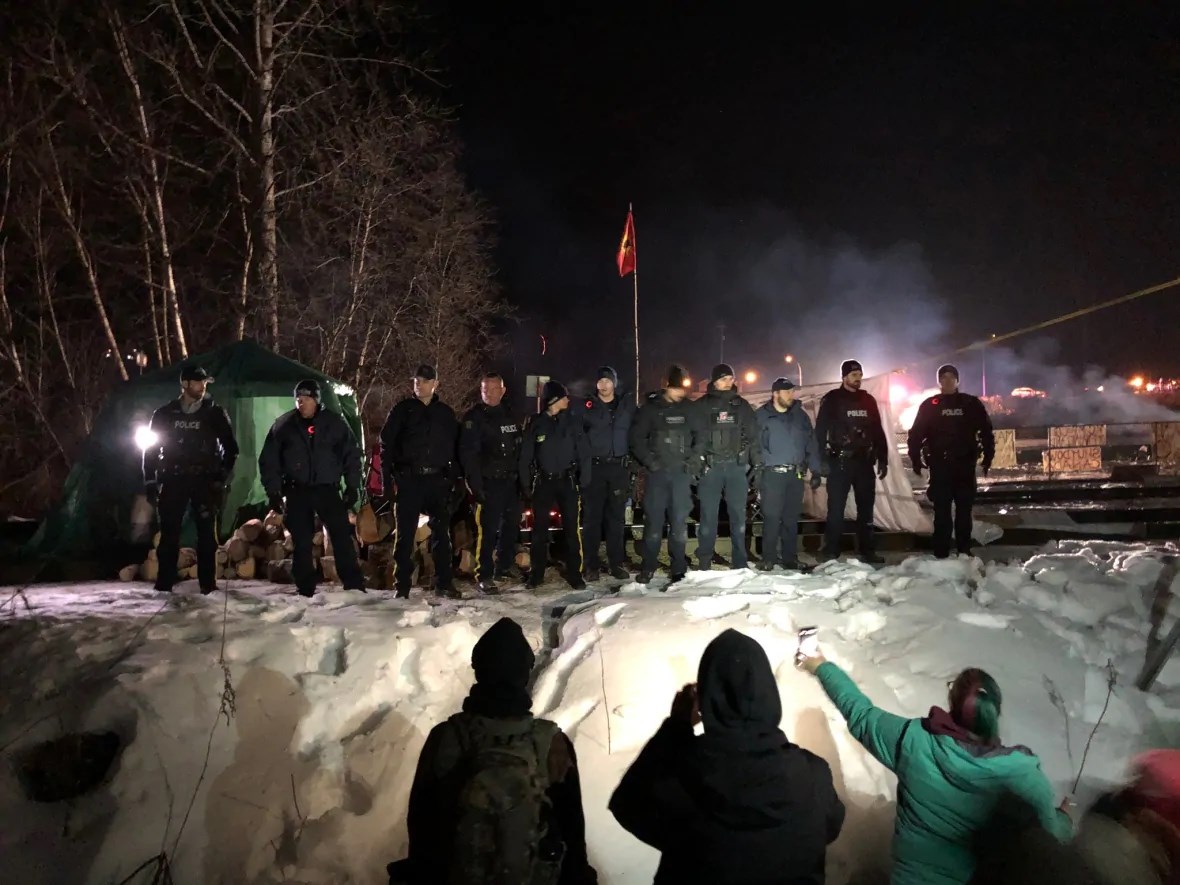 “Last night [the RCMP] arrested three of my chiefs. 40 RCMP officers descended on the tracks. They made a line with their vehicles … to stop people from witnessing as they arrested our elders and our young ones and our leaders who speak for our Nation. Is that a Nation-to-Nation to dialogue?

When they arrested those chiefs — in the heart of Gitxsan country — our people descended on them like a tsunami … and they shutdown Highway 16. Last night, the Gitxsan shut down the highway of tears ✊ And they kept bringing in more officers and RCMP [but] there were not enough cops in northern B.C. to suppress our Nation. That’s the power of the people coming together. And they did so in a good way, in a peaceful way. They facilitated dialogue. They simply asked that they release our leaders, our matriarchs, our elders. This is Gitxsan territory you must adhere to Gitxsan law. So our leaders were returned.

This criminalization of Indigenous peoples is not the way forward, because when they attack one of us, they attack all of us.

We all stand together because we recognize that what is happening in this country is 500 years of colonial policy perpetuating assimilation and genocide finally bubbling to the surface. What his happening on Wet’suwet’en territories is not simply the result of one single natural gas pipeline; it is the result of Canada’s systematic erasure of Indigenous law and sovereignty and their attempts to extinguish our rights and title to our territories.

Tim Groves February 24 ·  Following raids in Tyendinaga railway blockades went up today in New Hazelton, Maple Ridge (just outside Vancouver), Hamilton, and Rimouski. This is addition rail blockades in Saskatoon, Kahnawake, and Elipogtog. And La Presse is reporting that blockades are also still up in Listuguj, Wemotaci, Neskonlith, and Magnetawan.
Since protest began there have been at least 33 railway blockades, and numerous highway blockades and slow downs.

Let’s keep pressure on Canada and ths RCMP to stop their attack on land defenders ! They can’t arrest us all.

Maryam Monsef has not fulfilled our demands from our meeting with her a few weeks ago. We need to keep pressure on her! The attacks against our brothers and sisters across the country need to stop!! 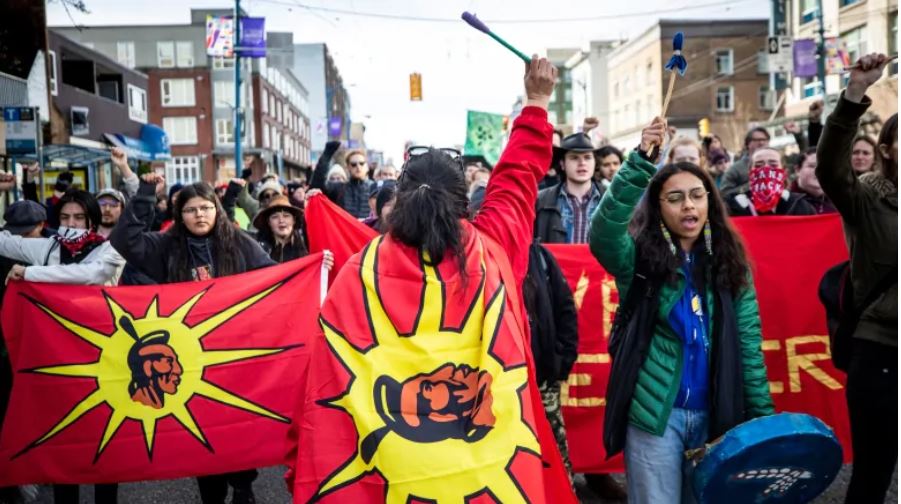 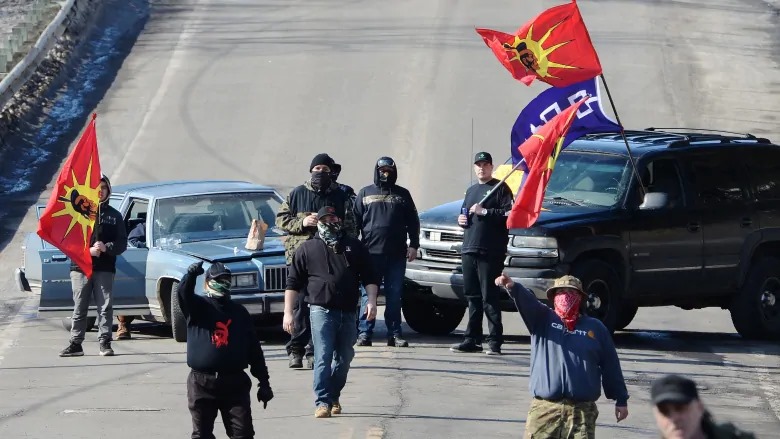 SIX NATIONS OF THE GRAND RIVER TERRITORY: Six Nations Land Defenders blockaded Highway by pass between Argyle and Greens Road near the town of Caledonia. Six Nations Land Defenders blockaded the same during similar indigenous uprisings, such as the reclamation of Kanonhstaton in 2006 and is a symbol of indigenous struggle in so-called Canada. The blockade is ONGOING at this hour and is in need of reinforcement 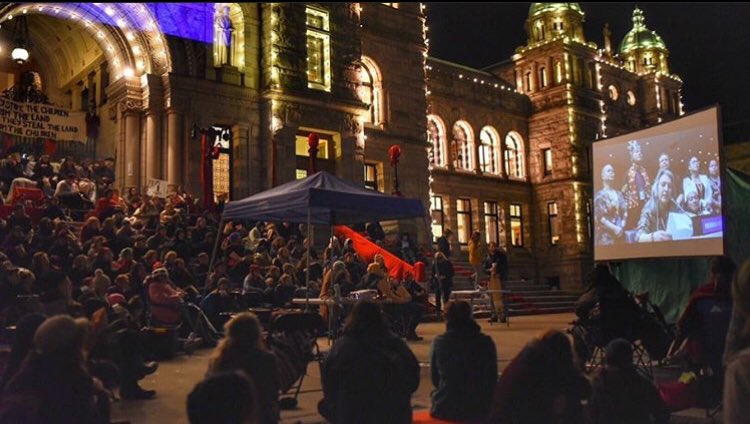 Indigenous youth occupying the BC legislature and watching Invasion, and Kahnasatake 270 years of Resistance  a documentary on the so called Oka Crisis tonight.
Join them this morning at 8 AM for a mass action and teach in
They have vowed to stay until Nation to Nation talks between the hereditary chiefs and the BC and Federal government occur. Sign up to help keep the occupation going here. 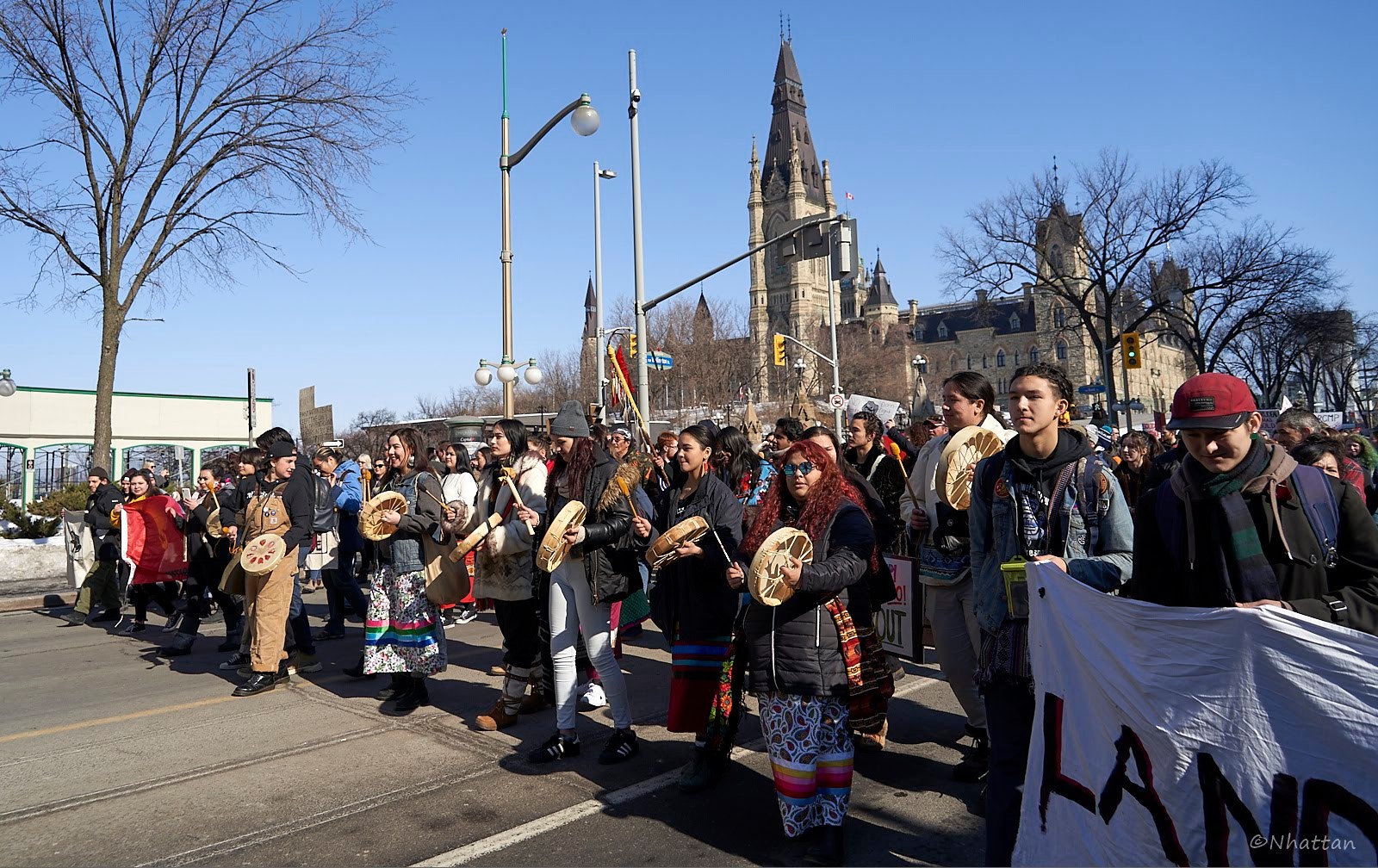 Women’s Coordinating Committee for a Free Wallmapu [Toronto]· 2.27.2020 ·  #UPDATE: Land Defenders Arrested at Work and Home following a Rail Blockade in Hamilton this week | Some Remain in Custody

[Feb 27] Several Land Defenders in Hamilton have been arrested at work and in their homes following the recent rail blockade earlier this week in solidarity with the Wet’suwet’en and Mohawk Nations, with a total of four detentions so far according to the website North Shore Counter Info. Some Land Defenders are still in police custody and will be appearing in court in the next few days. The statement calls on people to remain mobilized and take extra precaution at the time of taking action, such as using face coverings etc.
More information to come…