Canada invades. Invades on behalf of industry. Invades during ceremony. Canada tears us from our land. Tears us from our families, from our homes. Takes our drums away. Takes our women away. Jails us for protecting the land, for being in ceremony, for honouring our ancestors.

On February 10, RCMP invaded unceded Unist’ot’en territory, arresting and forcibly removing Freda Huson (Chief Howilhkat), Brenda Michell (Chief Geltiy), Dr. Karla Tait, and four Indigenous land defenders from our yintah. They were arrested in the middle of a ceremony to honour the ancestors. Police tore down the red dresses that were hung to hold the spirits of missing and murdered Indigenous women, girls, and two spirit people.

They extinguished our sacred fire.

We have had enough. Enough dialogue, discussion, negotiation at the barrel of a gun. Canada comes to colonize. Reconciliation is dead.
It is time to fight for our land, our lives, our children, our future.
Revolution lives.

Sub.Media
In the days following the RCMP invasion of Wet’suwet’en territories and arrest of Unist’ot’en matriarchs, solidarity actions have spread all across so-called Canada, clearly demonstrating the potential for groups of determined individuals to #ShutDownCanada through a series of decentralized rail, bridge, port and highway blockades.
#WetsuwetenStrong #ReconciliationIsDead
Want to get involved but don’t know where to begin? Check out this useful toolkit at:
http://unistoten.camp/supportertoolkit2020/

Politicians in Canada say they support the right to protest, but everyone has to respect the rule of law.

But whose law? The Wet’suwet’en hereditary chiefs and supporters say the unceded territory means their ancient uncodified laws — passed down through oral traditions and history — must prevail.

Internal emails, memos and confidential briefing notes also show that, immediately after the Delgamuukw decision came down from the Supreme Court of Canada on Dec. 11, 1997, B.C. government officials discussed tactics to fight land rights with legal challenges, to curb direct action or litigation by First Nations and to use federal money intended for the healing of residential school survivors to make treaty negotiations more attractive.

The Trudeau and Horgan governments have introduced an array of new policy mechanisms and “reconciliation” agreements, but Hagwilnegh said they promote essentially the same end result and remain unacceptable to the Wet’suwet’en.

“The government never likes it when we bring up Delgamuukw,” he said. “They clam up. And on those occasions when we have been able to educate government officials, the next day, poof, we get new officials sent to us.

Earlier today I wrote about the multiple places rail lines were obstructed in solidarity with the Wet’suwet’en peoples. Wet’suwet’en 2.13.2020

#WetsuwetenStrong Rail Blockades
Active rail blockades in solidarity with Wet’suwet’en as of 4pm PST February 13th.
Red = no trains able to move on this track. Locations not always exact.
All CN rail service in Eastern Canada and all intercity VIA Rail service throughout Canada have been temporarily shut down due to protests:
https://www.ctvnews.ca/canada/cn-rail-shutting-down-all-service-in-eastern-canada-over-pipeline-protest-1.4811036

CN Rail and Via Rail are shutting down huge sections of their railway networks as Indigenous blockades continue to cripple the country’s transportation systems.
Via Rail is temporarily ending most passenger services nationwide, expanding an earlier work stoppage that restricted train cancellations to the Toronto-Ottawa-Montreal corridor.
“Via Rail has no other option but to cancel all of its services on the network, with the exception of Sudbury-White River (CP Rail) and Churchill-The Pas (Hudson Bay Railway), until further notice,” the rail operator said in a media statement.
CN Rail, the country’s largest railway, is “initiating a progressive and orderly shutdown of its Eastern Canadian network” because Tyendinaga Mohawk protesters near Belleville, Ont. have so far refused to dismantle their blockade.
“With over 400 trains cancelled during the last week and new protests that emerged at strategic locations on our mainline, we have decided that a progressive shutdown of our Eastern Canadian operations is the responsible approach to take for the safety of our employees and the protestors,” J.J. Ruest, the president and CEO of CN, said in a media statement.
“This situation is regrettable … these protests are unrelated to CN’s activities and beyond our control. Our shutdown will be progressive and methodical to ensure that we are well set up for recovery, which will come when the illegal blockades end completely.”
Last weekend, CN Rail obtained a court injunction to end the illegal Mohawk demonstration. The injunction has been ignored by the protesters. Activists also ignored a request from the on-reserve Tyendinaga Police for them to voluntarily dismantle the blockade.
The injunction forbids any continued interference with the rail line under the threat of arrest. The Ontario Provincial Police has not yet enforced the injunction.
The federal government, which has jurisdictional authority over railways, has so far refused to intervene. Indigenous Services Minister Marc Miller has agreed to meet with the Mohawks on Saturday.
The Mohawk activists have said they won’t end their demonstration until the RCMP leaves the traditional territory of the Wet’suwet’en in northern B.C. Wet’suwet’en hereditary leaders had been blocking road access to a construction site for the Coastal GasLink pipeline, a key part of a $40-billion LNG Canada liquefied natural gas export project.

Protesters are shutting down railways, bridges, ports, and offices.
They’ve taken to the streets in solidarity with the Wet’suwet’en people opposing a gas pipeline in northern B.C.
It’s an extraordinary flow of events that have fused popular sentiment about Indigenous rights, the environment, and social justice.
For a Vancouver Island-based Mohawk scholar Gerald Taiaiake Alfred, Canada is witnessing no less than a revolutionary moment.
“I can remember saying 15, 20 years ago, that if we ever had a development in our movement where the power of Indigenous nationhood and Indigenous rights could be melded and brought together with the power of young Canadians who are committed to the environment and social justice, it would be revolutionary,” Alfred told the Georgia Straight in a phone interview Thursday (February 13).
“And I think that that’s what we’re witnessing,” Alfred said. 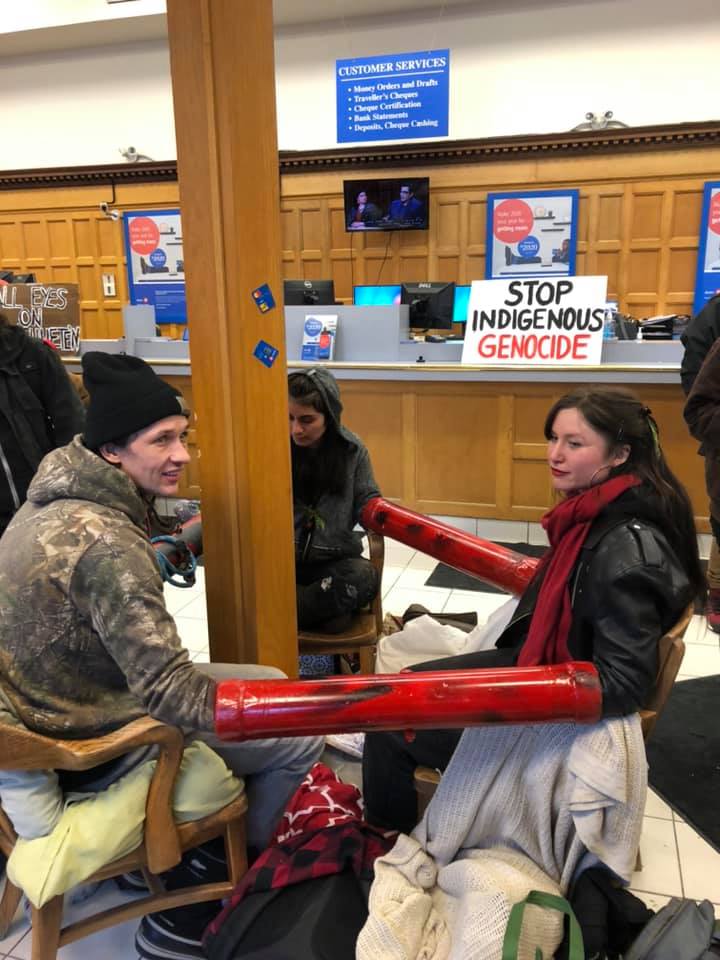 Lock down inside Bank of Montreal in Nelson BC that began yesterday! 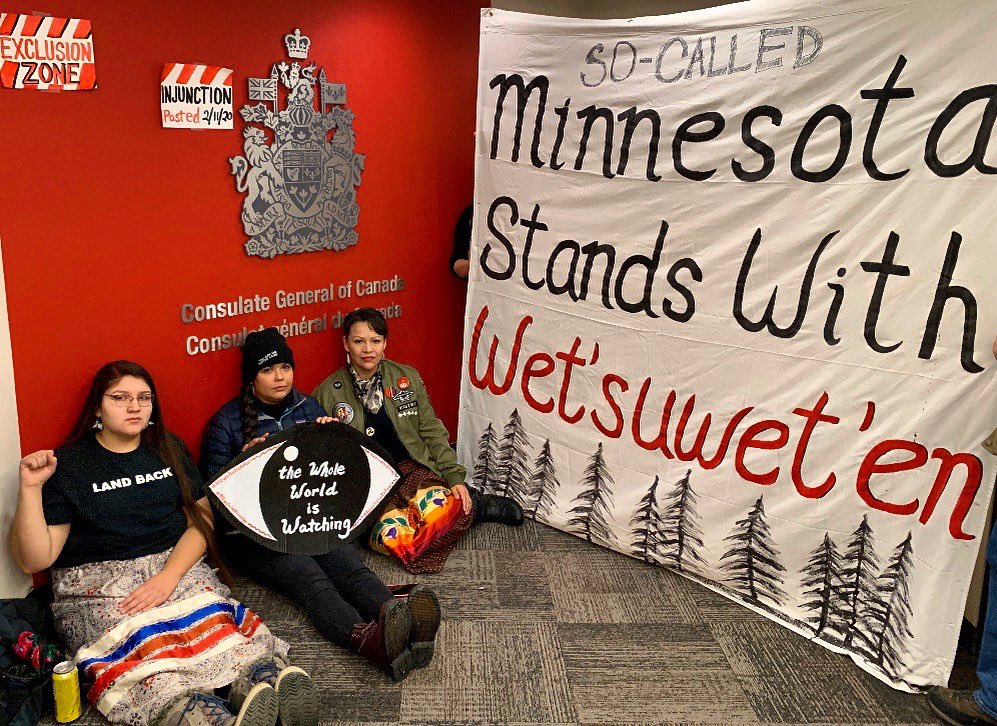 Actions at Canadian Consulates and Embassies are happening around the world!

Indigenous Youth Preparing to Peacefully Shut Down all Government Buildings in Vicotria Tomorrow.

This action will take place on the traditional lands of the Lkwungen. In conversation with people from local nations we wish to relay the request that supporters “continue walking with good minds and hearts”.

EVENT DETAILS:
On Friday, February 14th, from 8AM till Noon, we invite one and all to join us in a shutdown of the BC Government. At the suggestion of Indigenous Youth, we call on settlers to help take responsibility for the colonial institutions causing violence against Wet’suwet’en land and people by picketing BC government buildings. We will especially be inviting BCGEU workers to turn their union’s supportive statements for Wet’suwet’en into meaningful action.