Take to the Streets

Following is more information about the raids by Royal Canadian Mounted Police (RCMP) against the Wet’suwet’en peoples in British Columbia. We are being asked to do what we can in solidarity with the Wet’suwet’en. Multiple ways to do that follow.

UPDATE: Message from Freda Huson
Share widely: A message from Freda Huson, Chief Howilhkat of #Unistoten.
We will stand our ground. We refuse to be bullied off our lands. We will protect what is ours for future generations.
These lands will always be Unist’ot’en.
#UNISTOTEN #WetsuwetenStrong

Under cover of darkness early Thursday, the RCMP began raiding Wet’suwet’en land defender camps in northeastern B.C. and arresting opponents of a planned natural gas pipeline.
The first officers ⁠— many armed with tactical gear ⁠— began making arrests before 5 a.m. local time, removing journalists from the site and cutting off Wet’suwet’en radio communications, people in the camps said in reports posted to social media. Hours later, the Wet’suwet’en filed an application in court to have a judge strike down B.C.’s environmental approval of the pipeline, while demonstrations supporting the First Nation blocked highways and rail lines.
“This is an invasion of Indigenous territory,” said Cody Merriman, a member of the Wet’suwet’en community, in a live Facebook video showing a convoy of RCMP trucks streaming past a We’suwet’en checkpoint. At least 13 police vehicles were used in the pre-dawn raids.
“This is (Premier John Horgan’s) reconciliation,” Merriman said.

SHARE WIDELY – This morning at approximately 4:30 am, heavily militarized RCMP invaded unceded Wet’suwet’en territory to facilitate construction of the Coastal Gaslink pipeline. Dozens of cops with dogs and assault rifles were used to arrest 6 unarmed people.
This was a monitoring post, set up to look out for Wet’suwet’en people further up the road at the Gidimt’en Checkpoint and Unist’ot’en Camp. NO ONE was violating any injunction.
RCMP said they would use the least amount of force possible, but they deployed a full scale invading force.
We have never ceded or surrendered this land and we never will. We stand strong. No amount of force will stop us from being Wet’suwet’en, or living on our lands.
Two camps currently face the prospect of militarized police violence. We won’t back down. All eyes on #Wetsuweten yintah!
#WETSUWETENSTRONG
Donate: https://www.gofundme.com/f/gidimt039en-strong
Other ways to support: https://www.yintahaccess.com/take-action-1

“Oyate, Karla’s little 5 year old took my hand and said ‘promise you won’t let them take my yintah!’ She cried like somebody died when she heard she couldn’t stay because the bad men were coming and would take her away from her mother.”

“My Ancestors before me protected this land, the way we are, so I could enjoy it, and my children and grandchildren can enjoy it.
“Jail me for being a loving grandmother who cares about her Yintah. That’s what Canada is going to be doing.” – Brenda Michell, Chief Geltiy of #Unistoten 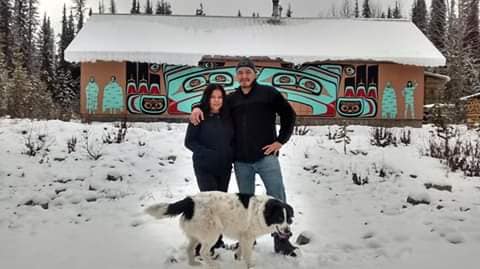 Testimony to the power of the Unist’ot’en Healing Centre:

“When me and johnny got to Unist’ot’en we were both in bad condition. We were so far gone in our addiction we needed help and didn’t know how to reach out or pushed people away. We were drowning out so much feelings greif. Trauma. Sadness. Anger. We planned on going to Unist’ot’en but couldnt leave the drinking life behind. After a tragic incident where we lost our baby neice. Johnnys aunty Sheila Mitchell helped us get there. Warner naziel and Freda Huson picked us up where we spent 5 amazing months getting to know the land and the amazing people we met. Who supported us in every which way they could. Our lives have changed because of Unist’ot’en. Me and johnny are ever so grateful. He misses trapping and hunting on the land. Also missing our Unist’ot’en family. Prayers are with u all today. Thanks for helping us get our lives back on track living healthy. Because of Unist’ot’en we have been sober. And have a healthy daughter. Forever in our hearts 💜”
Militarized Police are invading unceded Wet’suwet’en Territories to arrest grandmothers at their healing center for Indigenous peoples!
The time to rise up is now!

The Turtle Island News
Six Nations shuts down 403 in support of Wet’suwet’en
The 403 westbound near Ancaster has now reopened after Six Nations people shut down the highway in support of the Wet’suwet’en who were arrested this morning after RCMP began enforcing a n injunction awarded to Coastal Gaslink Dec., 31 . The hour long protest caused a massive backup .
It was one of several actions across Ontario today that blocked rail lines and highways.

Here in Iowa we will hold a vigil in solidarity with the Wet’suwet’en people at 5:30 pm tonight (Feb 7) at 4211 Grand Avenue in Des Moines.

My friend and Quaker Peter Clay has given permission to share his letter to Prime Minister Trudeau so you can modify it and send your own letter.

Subject: Stop the Assault on the Wet’suwet’en Land Defenders
7th February, 2020
Prime Minister Trudeau:
The whole world is watching you and B.C. Premier John Horgan. Stop the illegal and violent actions of the RCMP. I ask you to honor Canada’s commitment to the United Nations Declaration on the Rights of Indigenous Peoples and immediately cease the assault on the Wet’suwet’en land defenders.
Here in Des Moines, Iowa and all around the world, people are gathering in solidarity with the First Nations People of Canada. Do what is right Prime Minister Trudeau! The world is watching and the world must change how we power our communities. The time for fossil fuels in over.
Be a global leader! Respect indigenous rights and wisdom. Stand with indigenous elders and indigenous youth! This is YOUR moment to say “No more! We must and will respect the sovereignty of the unceded lands of Canada’s First Nations.” To say- “We must keep it in the ground!” The Coastal Gaslink Pipeline must NOT be built! Many of us in the United States look northward and hope for the leadership that is sorely lacking here. Please sir, speak and act for what is fundamentally right and just. We are counting on you. You can be a profile in courage.

I’m calling to ask that your government uphold
your commitment to the United Nations Declaration
of the Rights of Indigenous Peoples (UNDRIP) and
respect Wet’suwet’en Law by withdrawing the RCMP
from Wet’suwefen Nation and canceling Coastal
GasLinks permits.

I was horrified when heavily-armed RCMP
officers forcibly removed Wet’suwet•’n people
from their own territory last year. and want to make
sure your government doesn’t let this happen today.

All five Clans at the Wet’suwet’en have rejected
all pipelines. Coastal GasLink’s proposed pipeline
does not have free, prior, and informed consent
from the Wet’suwet’en. CoastalGasLink and the
RCMP are trespassing on sovereign land.