I’ve been thinking more about Spiritual Warriors since writing yesterday’s article. I realized I hadn’t written about the first time I was called a warrior, which led me to think of myself and other activists in those terms.

During my first meeting with the Kheprw Institute (KI) community, I was asked a number of questions about myself. I should have realized, but didn’t before I arrived for this meeting, that this would basically be an interview to see if I was someone they felt comfortable working with. Imhotep Adisa, the Director of KI, gently posed question after question to get me to reveal myself. He finally led me to the point of talking about my Quaker faith. Then again he said, “tell us more.” As I wrote at that time:

Which left me at the point where I needed to provide some example from my own life.  Since KI is built on concern for the environment, I spoke of how I had reluctantly purchased a used car for $50 when I moved to Indianapolis, mainly for trips home to Iowa.  Car rental was not common in the early 1970’s.  When my car was totaled several years after that, I decided to see if I could live in the city without a car, and have since then, 30 years ago.  I was hoping that would show how Quakers try to translate what they believe, what they feel God is telling them, into how they actually live their lives.

At that point Imhotep, with a smile on his face, said something like “Thirty years?  You are a warrior.”    I had never been called a warrior before.  It seemed a humorous term to use for a pacifist, but I liked it.

Then everyone looked at me…

Somewhat embarrassed at that point, what popped out of my mouth without much thought was “well…yes, I am really old!”, at which everyone laughed, and then our meeting did conclude.

The best part of the evening was that then several of the kids came up to me to shake my hand. 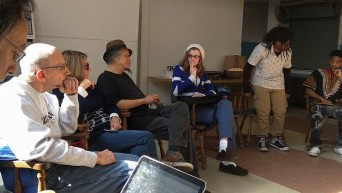 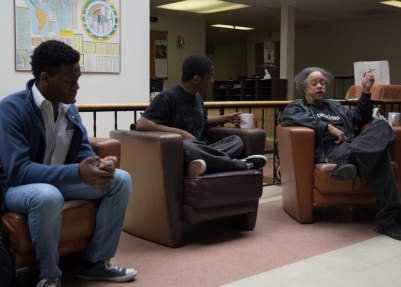 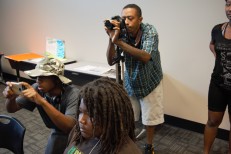 That illustrates the definition of a warrior as “one who is engaged aggressively or energetically in an activity, cause, or conflict.”

As Paulo Coelho writes in Warrior of the Light, “The Warrior’s persistence will soon be rewarded. Gradually, other Warriors approach , and they join together to form constellations.” It was the fact that I had actually been committed to doing something over time that finally convinced the KI community that I was serious about environmental activism. The KI community is a community of warriors.

I believe most Quakers are also warriors, and I think it would be helpful for us to think of ourselves as Spiritual Warriors. The term helps us focus on actually doing something related to the causes we are involved with. It can also provide a different way to look at others we are engaged with. Joshua Taflinger wrote, “what has risen to the surface at Standing Rock is a physical/spiritual movement”, for example.

“I used to think that top environmental problems were biodiversity loss, ecosystem collapse and climate change. I thought that thirty years of good science could address these problems. I was wrong. The top environmental problems are selfishness, greed and apathy, and to deal with these we need a cultural and spiritual transformation. And we scientists don’t know how to do that.”

Speth was arrested in front of the White House on Aug. 20, 2011 — along with Bill McKibben and eventually more than 1,200 others — in an act of nonviolent civil disobedience protesting the Keystone XL pipeline.

“My motivation,” he writes, “was climate change: After more than 30 years of unsuccessfully advocating for government action to protect our planet’s climate, I found myself at the end of my proverbial rope. Civil disobedience was my way of saying that America’s economic and political system had failed us all.”   https://grist.org/climate-energy/gus-speth-ultimate-insider-goes-radical/

Where my warriors at?

And so I feel like what has been said many times tonight and I appreciate the sentiment that we can say this now in this time and this generation is that prayer is the most G thing you can do homey. And I can say that for my life, in the things that have happened in my life, the anger, for the pain, for the hate, that I’ve carried, that forgiveness, and therefore remembering to pray for those that oppressed us, is the most powerful testament to mankind.

Where my warriors at?