Continuing with the queries I’ve been discussing recently about civic responsibility, following are my experiences related to water protectors and the Dakota Access Pipeline resistance in Indianapolis.

The introduction to these queries includes:  “Speaking out on a personal level in our communities may be difficult, even dangerous, yet by doing so we may encourage others to work for justice.”  The following shows how several people were introduced to social justice actions.

Two of the queries are:

How do we share our convictions with others? Do we express our opinions with courage,  yet with love, mindful of the Divine Spirit within everyone?

Are we careful to reach our decisions through prayer and strengthen our actions with worship? Are we open to divine leadings?

I was very concerned when I began to learn about the Dakota Access Pipeline, often referred to as the Bakken Pipeline in Iowa.  Beside the usual concerns about pipeline leaks, extraction methods, and greenhouse gas emissions, this project was also an outrageous example of environmental racism.  The route of the pipeline was moved from near Bismarck, North Dakota, when (the predominately white) people were worried about leaks affecting their drinking water.  The route was moved to within a mile of the border of the Standing Rock Sioux reservation, where not only the water supply but ancient burial grounds were threatened.

The White Pine Wilderness Academy that teaches about nature and native practices is in a wooded neighborhood near the White River on the near north side of Indianapolis.  When Matt Shull, Joshua Taflinger and Brandi Herron there wanted to find ways to support the water protectors at Standing Rock, they talked with my friend Jim Poyser, who lives near the Academy.  Jim is one of the 4 Action Leaders from the Keystone Pledge of Resistance.  He contacted the other three Action Leaders, Wayne Moss (white beard in photo below), Ted Wolner, and I (yellow hat below) to see if we would be interested in helping with this effort, because of our training and experience related to the Keystone Resistance.  We all wanted to do so.

It was decided that we would hold a vigil on the Circle at the center of downtown Indianapolis to raise awareness about the pipeline (#NoDAPL).  The photo below was taken the night before, when we gathered at the Academy to organize the vigil, make signs for it, and also where a trailer was built to haul donated supplies to Standing Rock.

Below I am helping make signs.  Signs should have few words, but clearly tell your message.  They should also be very visible.  The sign above, which appears in many of the other photos, is a great example.  There were wooden handles on the ends to hold it.  Below, we used markers with thick lines, and colors that stand out.  We also had a variety of messages–Water is Life, Save Missouri River, Honor the Treaties, besides Stop Dakota Pipeline.

I’m helping make signs at the Academy that evening

The next (Saturday) morning I arrived downtown, and saw Joshua and Brandi and kids pulling a wagon full of the signs.  We didn’t know who would show up, but were very grateful that besides Jim, Wayne, Ted and I from Keystone Resistance, a large number of Native Americans, many in traditional dress, showed up.

Sage was burned, and several speakers talked, mainly to those who were part of the vigil, about native issues.  There was a profound feeling of spirituality encompassing us all.  This related to the query: Are we careful to reach our decisions through prayer and strengthen our actions with worship? in a whole new way for me. I think almost everyone who has had anything to do with Standing Rock and the water protectors has be affected by the spiritual aspect of this.  And that is a large part of the global support for, and success of these efforts.

Also shown below are a number of Quakers from North Meadow Circle of Friends meeting.

The drummers (video below) added a lot to the ceremonial aspects of the gathering.

Joshua Taflinger(center with hat) and Brandi Herron (megaphone) are the primary organizers, from the White Pine White Wilderness Academy. 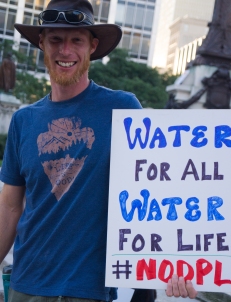 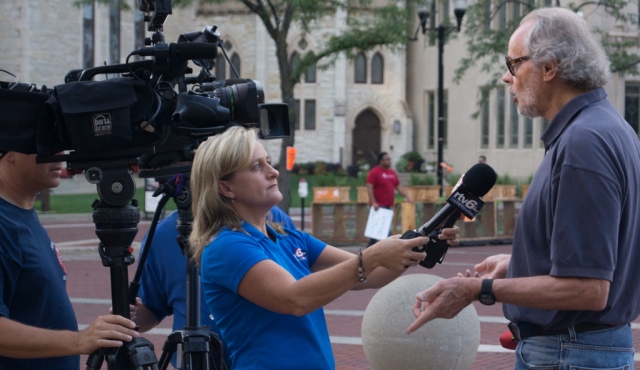 After an hour or so, we began to march, first to the State Capitol building, then on to the Eiteljorg Museum of American Indians and Western Art, which agreed to allow us to gather on their lawn.  The Indianapolis police on bicycles were very friendly and helpful to stop traffic during our march. 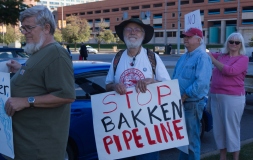 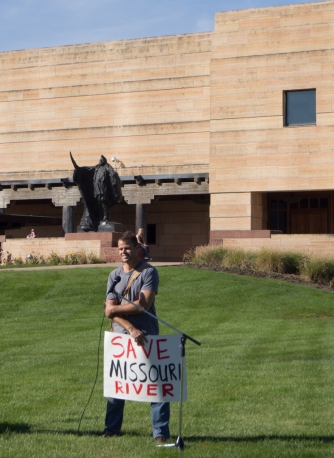 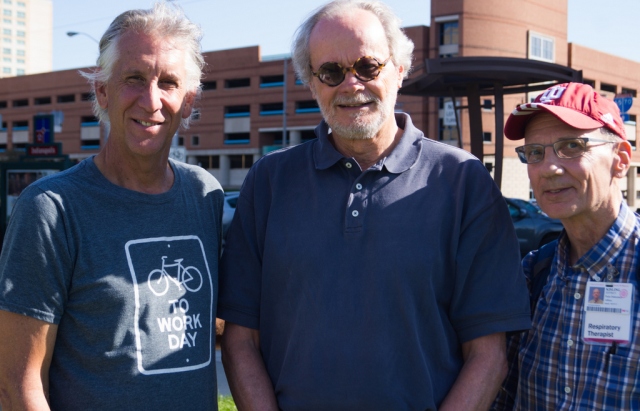 My ALWAYS present activist buddies from our years as Action Leaders of the Keystone Pledge of Resistance, Jim Poyser of Earth Charter Indiana and (left) and Ted Wolner who teaches at Ball State University.  I’m on the right. 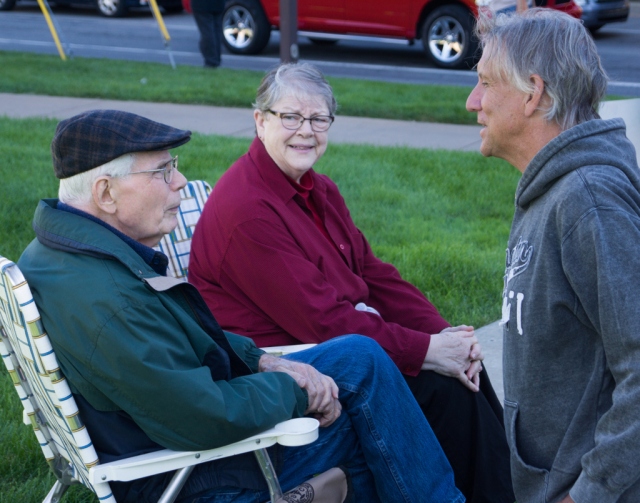 Briana Dines (with Brandi Herron) has just returned from Canada, where she was involved with Indigenous people.  She had been involved in Keystone here prior to that.  She told of her experience of visiting the Standing Rock camp recently. 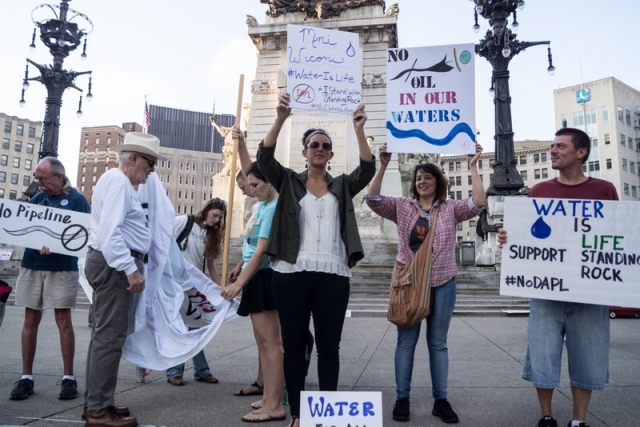 I was really happy to see so many Quakers from North Meadow Circle of Friends, where I attend. 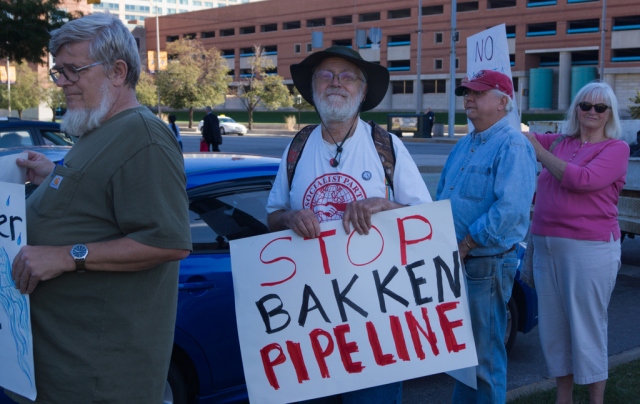 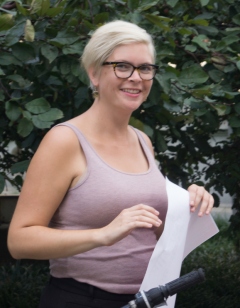 Other North Meadow Friends are Shannon Effler and Kevin Angell.

On the right is my friend Jeff Howell who is involved with social justice issues, such as living wage, and a bicyclist and photographer.

Katie and Annie Glass walked from their apartment in my neighborhood.  Katie told me she and Derek just purchased an electric car, which they charge at Derek’s work from a renewable energy electrical source!  Derek developed the Sustainability Indiana website that aggregates the blogs of organizations and people who work on sustainability issues in Indiana.  Later in the year, Katie organized a kids’ peace rally at the State Capitol building.

We talked about further actions, and decided to have another gathering related to defunding the pipeline a few weeks later.  After gathering at the Eitoljorg Museum, where prayers were given, led by Native Americans, we marched first to the PNC Center, then the Chase bank.  At each bank, the group stood in silence while those with accounts went inside to close their accounts.  $110,000 was withdrawn that day. 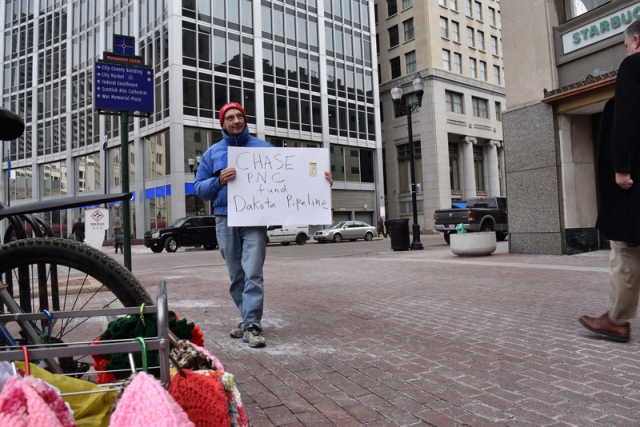 Also related to the queries, “Speaking out on a personal level in our communities may be difficult, even dangerous, yet by doing so we may encourage others to work for justice.“, Alex Red Bear contacted Joshua, saying he wanted to organize another rally related to the pipeline.  Alex invited people to speak, so I talked about how people could close their bank accounts to help defund the pipeline.  Following are photos of Alex and that rally. 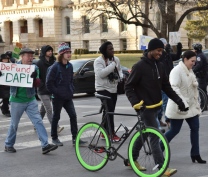 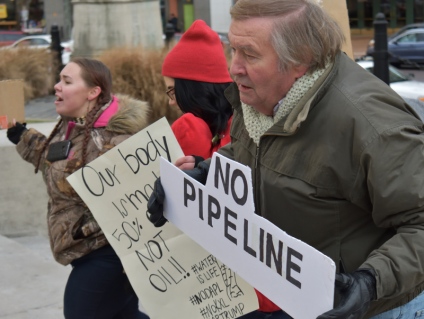 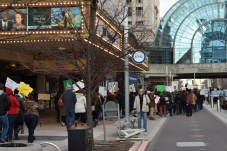 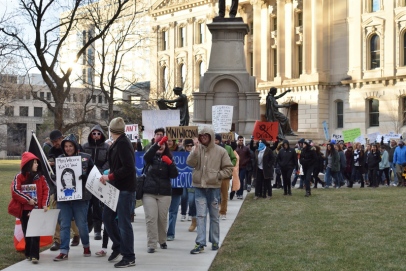 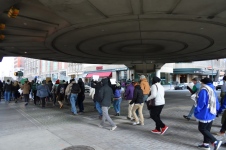 Another vigil was held outside the theater where music activist and Standing Rock supporters Nahko and Medicine for the People were performing in downtown Indianapolis.  While we were standing in the freezing cold, members of the band went past us, giving us huge smiles and fist bumps.  I’ve written a lot about Nahko’s activism. 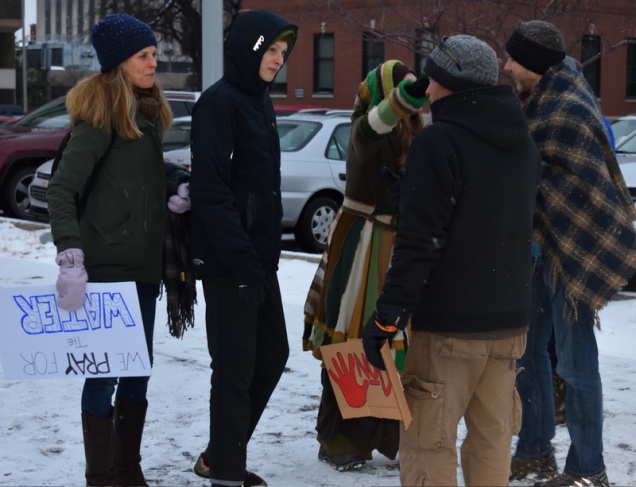 One of the most moving gatherings was not so much a public rally, but a gathering for those who had participated in these events throughout the year to gather together in prayer and to reflect on what had happened.  We gathered on a very cold day on the grounds of the State Capitol building. 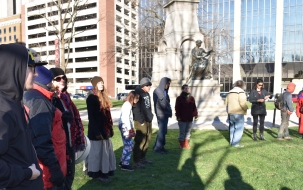 There is an active Federal court case related to the inadequate environmental impact study of the Dakota Access Pipeline, specifically not taking indigenous concerns into account.

I wrote several blog posts about my journey in September related to the pipeline, that began with the deliver of a petition for the removal of Richard W. Lozier, Jr. from the Iowa Utilities Board, which is responsible for approving pipelines, followed by a 40 mile bicycle journey to Bear Creek Friends meeting, where we had an evening program related to the activism of Nahko. 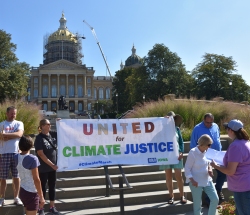 The struggles continue.  I’ve been very affected by the spiritual response of Native Americans, Quakers, Nahko, and all the water protectors.  Thanks be to God.