After venting my frustration about environmental inaction, I thought it could be helpful to hear about some of the ways you can get involved in fixing environmental problems.  Following is the story of how I got involved with the Rainforest Action Network (RAN), which was how I got started in community building and organizing in Indianapolis.

I first began working with RAN in 2013 when the Keystone Pledge of Resistance #NOKXL campaign began.   http://nokxl.org/wp-content/kxl_pledge.html

This turned out to be a brilliant organizing campaign. Even better, it became the first successful resistance against the power of the fossil fuel industry, resulting in President Obama denying the permit to build the Keystone XL Pipeline.

The idea (from the Rainforest Action Network, CREDO, and The Other 98%) was to post the following pledge on the Internet, that people could sign:

“I pledge, if necessary, to join others in my community, and engage in acts of dignified, peaceful civil disobedience that could result in my arrest in order to send the message to President Obama and his administration that they must reject the Keystone XL pipeline.”

The idea was to build a movement based upon the nonviolent civil rights and peace movements of the 1960s.  To use nonviolent civil disobedience as the method for social change. Eventually over 97,000 people signed the pledge.

The brilliant part of the campaign was that it provided checkboxes on that web page where each person could indicate ways they wanted be engaged with the campaign.

The contact information of anyone who wanted to be involved was collected.  This is how the movement was built.

The next step was to provide training to those who indicated they would take the lead in organizing in their community.  RAN identified 25 cities in the United States where the most people had signed the Pledge.  On a series of weekends in the summer of 2013, RAN activists who had experience in organizing held training sessions in each of these cities for the people who had indicated they would be local action leaders.

Indianapolis was not one of those 25 cities, but I was going to be in Iowa to attend Iowa Yearly Meeting (Conservative)’s annual meeting near the time of the training in Des Moines.  Below is our group, including Gabe (left) and Todd Zimmer (right) from RAN.  Todd and I continue to be in contact and have worked on some other things since then.  Our group also included Frank Cordaro of the Des Moines Catholic Worker Community.  The training was excellent, with Saturday devoted to the background of the Keystone Pipeline, theory and practice of nonviolent civil disobedience, role playing, legal and media issues, how to select a target, all of the roles that need to be filled, and how to build and train your local movement.  The following day we then went through the process of doing the things we had been taught the day before.  This was very effective training. 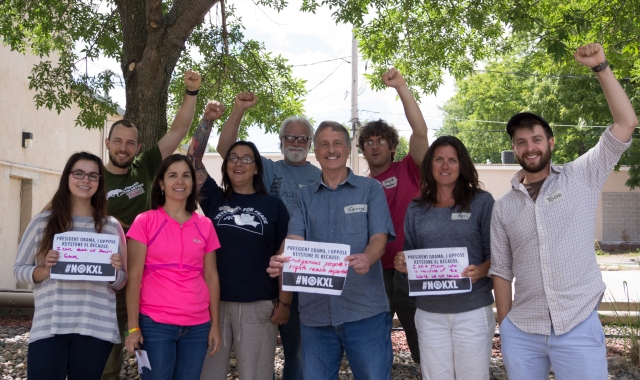 RAN continued to support us as we built our local movements.  When I returned to Indianapolis, RAN put the those of us who had been trained in other cities (Ted Wolner, Jim Poyser, John Gibson, Wayne Moss and I) in touch with each other, and provided the contact information of those who had indicated they wanted to be involved in our area.  We identified our target as the Federal Building in downtown Indianapolis and organized our action.

One of the interesting parts of this was delivering a letter of intent to the people at the Federal Building, so they would know ahead of time what we planned to do, and why.  There were several reasons for that.  One was we knew this information would be shared with others in the Federal government, increasing the knowledge of our campaign where it might have some real impact.  It was also a further step in the journey for us.  We were a bit nervous about doing this, but it was a humanizing event.  We were politely received and it felt like we made a connection with the people we talked with there.

We held six training sessions, training nearly 50 people. Across the United States around 400 local action leaders were trained, who in turn trained about 4,000 people in their local communities how to engage in nonviolent direct actions.

Raising awareness about the Keystone Pipeline and the detrimental effects of tar sands extraction was one of the primary goals of the campaign.  We held numerous demonstrations in downtown Indianapolis.

During our weekly peace vigil, which is held in front of the Federal Building that was our Keystone target, I began to bring Keystone Resistance signs.

When Indiana Senator, Joe Donnelly, indicated his support for Keystone because it would create jobs, I wrote the following letter that was published in the Indianapolis Star

My friend Derek Glass and his intern, Andrew Burger, helped me create this video as another way spread awareness about the Keystone Pipeline and tar sands

I’ve also written about the Kheprw Institute (KI) community that I’ve been involved with.  They allowed us to hold a public meeting at their building, where each of us local action leaders talked about what we were doing in Indianapolis, followed by a community discussion about environmental action.

President Trump has since approved the Keystone XL permit.  But because of these years of delay and the changing dynamics of the energy market, it is unclear if Trans Canada will go ahead with the pipeline now.  And the Justice Department was required to appear in a Federal District Wednesday to defend approving the pipeline without an adequate environmental assessment of the project.

Here in Indianapolis our Keystone movement was able to provide assistance to those who have built a similar movement to support the water protectors at Standing Rock, and oppose the Dakota Access pipeline. 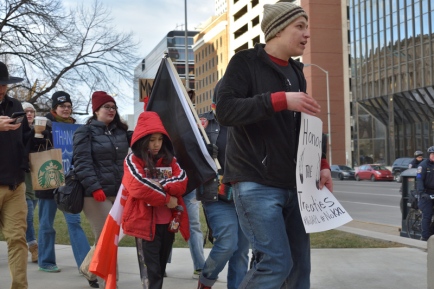 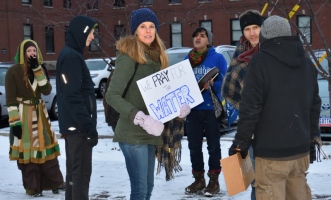 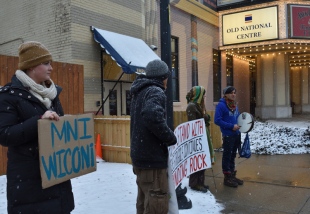