Although the Army Corps of Engineers announced, yesterday, that it has denied the easement to build the part of the Dakota Access Pipeline (DAPL) at the presently planned location, 1/2 mile from the Standing Rock Reservation border, we know this is not necessarily the final word about the pipeline.  The Corps said more study was needed and suggested that another site for the river crossing needed to be found, indicating that if the proposed more complete environmental assessment is done and finds no significant problems, the pipeline could still receive the final easement at a new location.

What is potentially significant about this delay, though, is that Energy Transfer Partners is facing deadlines they will now be unable to meet.  It is my understanding that failing to meet those deadlines will provide opportunities for the financial institutions backing the pipeline, to withdraw their support.  DNB , the largest bank in Norway earlier got rid of its investment in the pipeline.  Recent efforts here in Indianapolis and around the world have focused on actions asking financial institutions to divest.

For the past century Lakota spiritual leaders have spoken of a vision of a Black Snake crawling through their land, a prophecy that Native Americans say refers to oil pipelines.  This symbol of evil has been blocked, but not defeated,  yet. 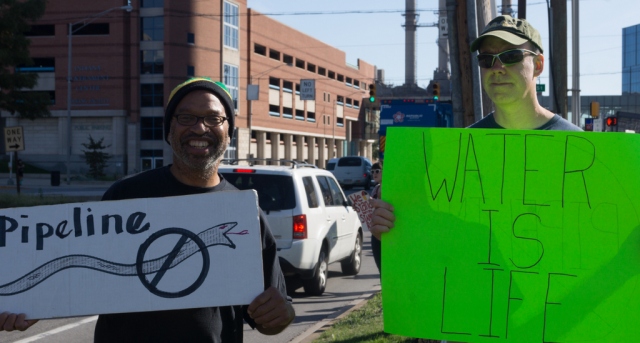 And yet, for all the caution, this decision, like President Obama’s rejection of the Keystone XL Pipeline permit, is perhaps as significant symbolically as for any other reason.  The largest, most profitable industry sector is finally being forced to begin to account for their impacts on the environment and people’s lives.

It was such a stunningly blatant act of environmental racism to acknowledge the environmental concerns of the city of Bismarck, by moving the pipeline away from the city, to the very edge of the Standing Rock reservation.

The inspirational coming together of the Native American tribes has shown, again, the power of spiritual, peaceful, nonviolence campaigns.

This is a template for those of us who are preparing for the consequences of many of the policies the new Republican administration has said it will be trying to implement.  Many of those policies will have oppressive effects on many different people.  The corruption of the political system means we need to employ other tactics to protect ourselves and others, and a commitment to nonviolence and attention to the spirit are how we will be successful, as just demonstrated by all who worked so hard for #NoDAPL.

This entry was posted in #NDAPL, civil disobedience, Uncategorized. Bookmark the permalink.