In yet another example of global environmental leadership and creative resistance, water protectors in North Dakota took back unceded territory affirmed in the 1851 Treaty of Ft. Laramie as sovereign land under the control of the Oceti Sakowin

Mekasi Camp-Horinek, an Oceti Sakowin camp coordinator states, “Today, the Oceti Sakowin has enacted eminent domain on DAPL lands, claiming 1851 treaty rights. This is unceded land. Highway 1806 as of this point is blockaded. We will be occupying this land and staying here until this pipeline is permanently stopped. We need bodies and we need people who are trained in non-violent direct action. We are still staying non-violent and we are still staying peaceful.”

Joye Braun, Indigenous Environmental Network organizer states, “We have never ceded this land. If DAPL can go through and claim eminent domain on landowners and Native peoples on their own land, then we as sovereign nations can then declare eminent domain on our own aboriginal homeland. We are here to protect the burial sites here. Highway 1806 has become the no surrender line.”

This seems only right, especially since eminent domain has long been abused by private, pipeline companies for their own profit.  Many farmers and landowners did not want to give up their land for the Keystone, Dakota Access, or other pipelines.  As just one example, imagine the amount of damage done to the tile systems in the fields to aid water drainage.

Perhaps this will trigger an honest and ethical review of Native American rights in regard to infrastructure projects, as the Obama administration has indicated it wants to do. 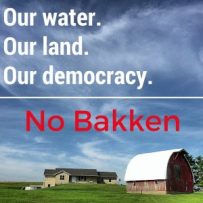