Preparing for the Future

In thinking about the future, the most common, fundamental error one can make is to start from the assumption that our daily lives will continue basically as they are today, and nothing could be further from the truth. Once one begins to understand that, the other fundamental error is to believe there is time to prepare for the coming changes. Instead, once you begin to understand the changes that are coming, you realize much of that is already happening, but most people haven’t yet put what appear to be independent events into the correct context of the whole picture.
One of the reasons Friends MUST engage with communities currently experiencing racial, economic and environmental injustice is because these communities have been struggling with the deteriorating conditions that are quickly spreading to all communities, TO ALL OF US. It is not (only) because we have always been called to help those who experience injustice, but because these communities understand the changes that are already, quickly, coming to us, and they are already creating solutions. We need the knowledge that they have to teach us.
The two, interrelated, major sources of change are (1) the breakdown of an economy and society based upon fossil fuels, and (2) changes resulting from climate change.

Depletion of the fossil fuel supplies

We are past the point of “peak oil”, meaning we are running out of fossil fuel, which is nonrenewable. You can’t just make more of it. It is welcome that the switch to renewable energy sources is finally occurring, and at an accelerating rate. The problem is misunderstanding that when we say we are generating XX percent of electricity from renewable sources, we are not talking about anywhere near the total energy used by society. In other words, that doesn’t address the fossil fuel used by the gasoline/diesel motors of vehicles and industrial processes, or heating oil, at all. We simply cannot make up all the energy currently supplied by fossil fuel, with electricity from renewable energy sources.
Additionally, electric cars demonstrate another energy problem. It is great that electric cars can move without generating greenhouse gases. But as the number of these vehicles increases, that will dramatically increase the electrical energy needed to be generated.
The practical result of this is that transportation will be significantly reduced and restricted. The impact of that will be problems supplying cities with food, and industry with raw materials, among other things. Every industry will be hurt. For example, hospitals will not be able to continue complex operations like surgery and intensive care because of the inability to keep manufacturing and distributing complex medical systems, sterile items, etc. Transportation will also be negatively impacted because we won’t have the means to repair our already failing infrastructure, so major bridges will collapse and not be repaired, for example.  This will also severely decrease or stop transoceanic shipment of food and supplies.

The single thing that could have prevented our current situation would have been to develop mass transportation and better designed communities, and to stop the explosion of the number of personal automobiles, and the miles they were driven.
But that did not happen, and now we have polluted our environment past the point of recovery. Ever more extreme weather, rising oceans, and toxic air, land and water are what we and the few generations yet to come are left with, and then humans will be extinct.
The amount of greenhouse gases in the atmosphere and CO2 absorbed by the ocean mean we are in a death spiral of heat, and acidic oceans. We are on track to well exceed 4 degrees air temperature increase at least. The oceans have done their best to absorb heat, but are reaching the point where they can’t do much any longer, meaning air temperatures will increase at an accelerating rate. The acidic pH of the waters (the result of absorbing CO2, which is converted to carbonic acid) is eating the calcium shells and killing marine life and the coral reefs, destroying a major food source.
The hotter air will hold more water vapor, causing desertification in some areas, and massive rainfall and flooding in others, both adversely affecting food supplies. The terrible flooding we have seen recently will only become more frequent and severe.
Years of drought are also resulting in more, and more ferocious wildfires. Trees are of course a major way CO2 is absorbed from the atmosphere, and oxygen added to it.
As air temperature increases, plants that are normally edible begin to hold toxins as a protective mechanism, making them inedible, further reducing food supplies.
Ocean ice is melting much faster than anticipated meaning ocean water levels are rising much faster than expected, and will quickly result in massive flooding affecting those living in coastal cities, forcing massive migrations of millions of people. All this will happen even if we stopped creating greenhouse gases today. The jet stream has moved as far south as the equator, causing predictions of disrupted seasons. The flow of major ocean currents and their effect on air temperatures is being disrupted.
Environmental efforts will only help slow how quickly this happens.
These natural disasters and mass migrations of people are already overwhelming our governmental systems. Civil disorder will increase dramatically. It is best to think in terms of the past history of the “wild west” where there was little protection by law enforcement and no social support programs. Imagine what will happen as the people who live in New York City, Los Angeles, and Miami to name a few are flooded out of their homes. We will be seeing millions of people coming to the Midwest, needing food, shelter, etc.

All of that provides the context for the vision of Scattergood Friends School and Farm as a self-sufficient community of Friends and people from impacted (by economic, social and environmental injustice) communities. Friends’ personal lives will be affected by the breakdown of society described above. We will need a new way to survive ourselves.
The reason we need to include people from impacted communities is both because our previous advantages from being white were unjust and not morally justified. To begin to correct that, we need to incorporate people of color into our communities as equals. In addition, as mentioned above, these people are already dealing with the situations that we will ALL be experiencing in the near future. Indeed, many of us haven’t recognized the situation we are already in.
I would like to see us do what we can to make life as good as possible for everyone, rather than having millions of people living in abject poverty. 40% of the kids in black communities go hungry, and are continuously exposed the toxins in the air, land and water related to fossil fuels. My friends of color expect to be pulled over by the police for “driving black”. I see tears running down the faces of parents and hear them choke up as they speak of the fear for their children’s lives anytime they are away from home. Police so often literally get away with murder. Social safety nets face continuing decreases in funding while the military gets obscene amounts of money. These are constant facts of life. What does waiting mean to them?
Iowa Friends live in luxury by comparison.
What I would like to see from the Yearly Meeting this summer is a decision to make Scattergood School and Farm a Beloved Community of Friends and people of color. And for monthly meetings to embrace the Quaker Social Change Ministry (QSCM) model that we have found so rewarding here at North Meadow. That is why I spoke about QSCM at our Peace and Social Concerns committee meetings at Yearly Meeting last year, and at after meeting at Des Moines Valley, and have been sending information all year about to the Peace and Social Concerns Committee members. And this is why I worked with the Yearly Meeting program planning committee and AFSC to make it possible for Greg Elliott to spend the week with us at Yearly Meeting, and speak at Wednesday evening’s collection.
I am deeply aware of a huge need for spiritual support in our society today. Even those who once participated in organized religion are increasingly finding their spiritual needs are not being met there.
I realize the transition would not occur overnight, but we could start the plans to make this happen now. Friends need to have an accurate understanding of the changes that occurring now, and that are coming, and how quickly. 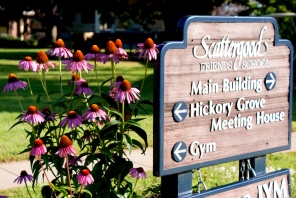 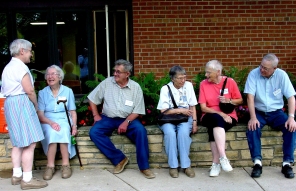 Taken during photography during summer camp at the Kheprw Institute 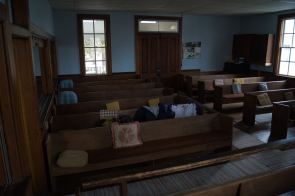