Once again I was pleasantly surprised to awaken feeling fairly refreshed, despite being pretty tired at the end of yesterday’s 15 miles, and staying up late to write. Since we were all sleeping in the same large room, the lights went out a little after 10 p.m. There were no windows so it was pretty dark. Several others and I were in a smaller ‘media’ room writing. I didn’t get to bed until 11:30. It was a little tricky finding my way through the large darkened room to my sleeping bag, hoping I didn’t try to get into the wrong one 🙂

When we arrived yesterday I discovered I had worn a hole into the sole of my shoes, and developed a blister. I would have been more concerned but I had seen Miriam work on a number of other people’s blisters. She cut a piece of adhesive foam larger than the blister, then cut a hole in the middle of that the size of the blister, to help keep pressure off it. Then the ever useful duct tape was wrapped around the foot to hold things in place. And it worked pretty well. A photo of my bandaged foot was included in the article about the March in the Fort Dodge Messenger, Many Steps, One Journey. 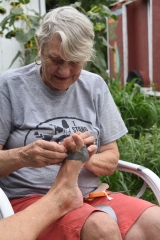 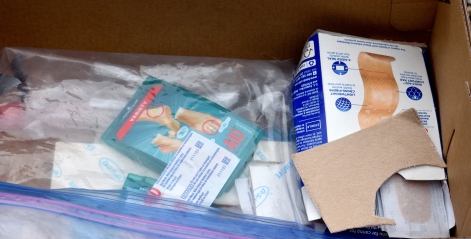 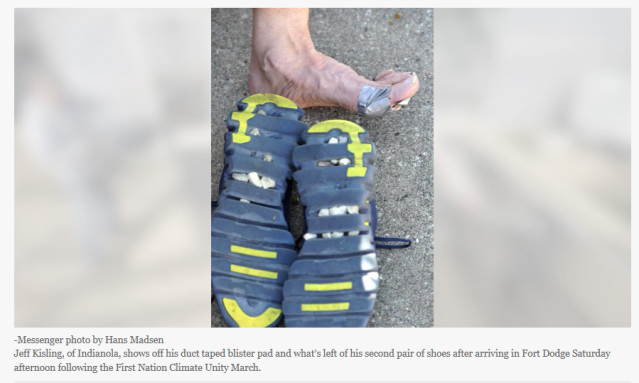 It was raining harder than ever when we started out that morning. But again I didn’t hear any complaints. We were warned to be more aware of traffic because we started out going through town. Before we started burning sage was brought to each of us. And Alton made a raincoat for his dog Oceti.

Being outside all day, and sometimes sleeping outside (sometimes in some strong thunderstorms) has made me more and more aware of the natural world. I’ve mentioned before how I enjoyed being outside as I trained for this March. Walking has been much more interesting now that I am aware, as Indigenous people have always been, that everything: trees, water, plants, rocks, wind, etc. has the Spirit in them. I found myself focusing on talking to the trees, squirrels and birds as I walked. 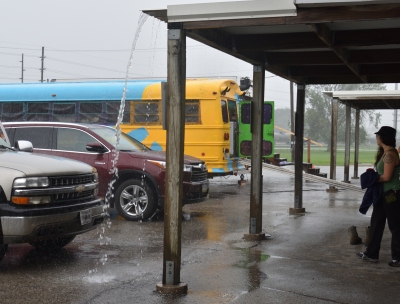 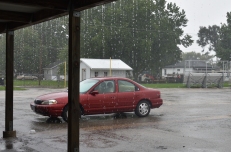 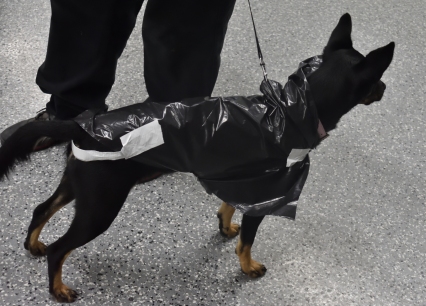 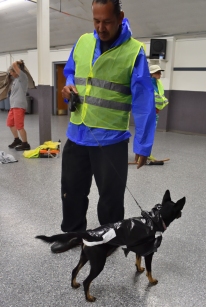 At one rest stop a police officer stopped to see what we were doing. Manape spoke to him. We were careful to use a system to announce when a car was approaching from the front (“car up”) or back (“car back”). Everyone then immediately formed a single file and got as far off the road as possible. Even so, the police often seemed to have heard about us marching, though none of the policemen caused us any trouble. 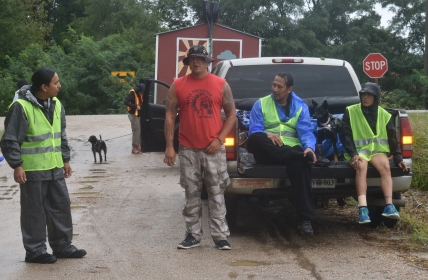 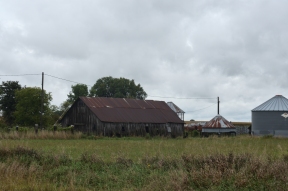 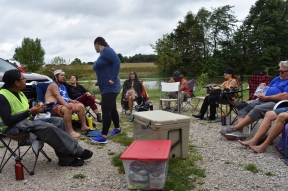 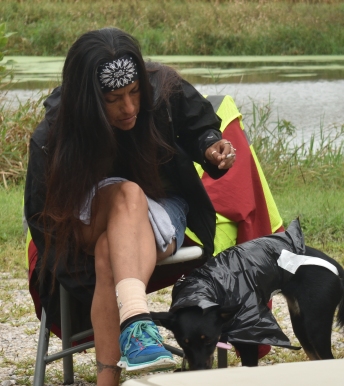 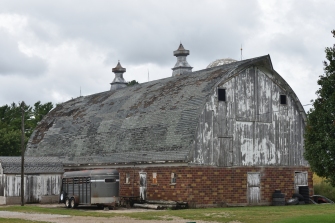 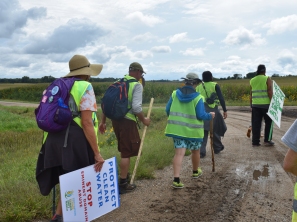 There wasn’t quite as much talking today since there wasn’t much of a shoulder on the road, so we had to walk in single file.

Before crossing the river just before reaching our destination of Pilot Mound, we came to another pipeline crossing. We could see the area where trees had been removed to build the pipeline on the hill on the other side of the river. 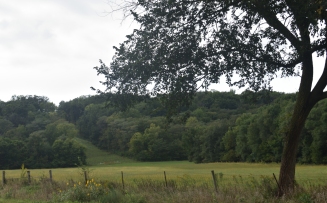 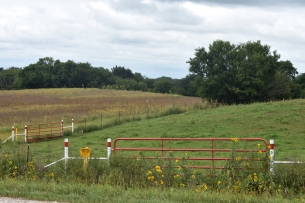 As always, we stopped for prayers. This time I was asked to lead them. I was very happy to have this opportunity to share some about Quakers and the Spirit. As we stood in a circle holding hands, I mentioned that Peter Clay, Lee Tesdell, and I were Quakers. And that I hoped they would meet my brother Randy, also a Quaker, when he comes to Fort Dodge at the end of the March, for the celebration and give me a ride home. I’ve been trying to share about Quakers as opportunities come up for several reasons. I think there are many parts of Quakerism that are common with the spirituality of Indigenous people.

And as Manape has said, the reason we are marching together is to make it possible for us to continue to work together in the future. For that to happen, we need to trust each other. And for trust to be established, we need to understand each other. That was why I shared about Quakerism when it seemed appropriate.

As we stood in the circle I said that Quakers do not believe spirituality is just a matter of Sunday morning services. We try to be attentive to the spirit all the time, though we often get distracted. We do also gather together Sunday morning to worship in silence. That sometimes someone is given a spiritual message that they speak into the silence. During the March someone had asked if I was a minister and before I could answer, Miriam said, “he’s a Quaker and all Quakers are ministers.”

During the ceremony at this pipeline crossing I asked the circle of my friends to listen together to the Spirit (saying we wouldn’t do so for a whole hour). But in the time we spend worshipping together, I felt the presence of the spirit among us. Afterward several people gave me hugs and thanked me. As I think about it now, I have felt the spirit among us all week. 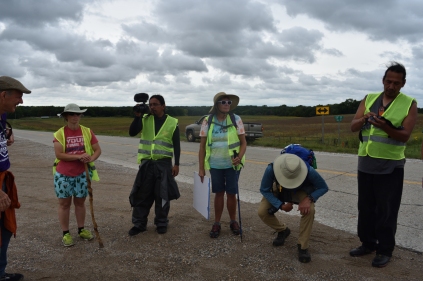 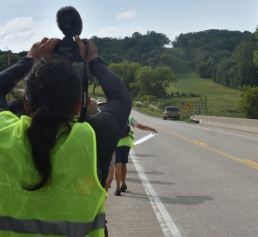 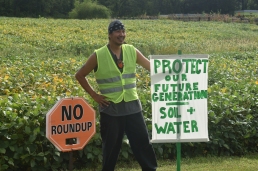 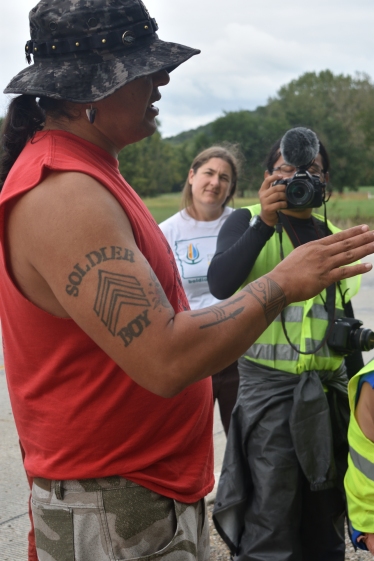 Once we arrived in Pilot Mound some of us noticed we were being followed by a car for a while. We learned the driver was Manape’s father, Frank, and he was just enjoying watching us march together. Frank has been a very active activist.

One of the most moving parts of this journey occurred as Frank spoke to us before we ate dinner. He began by saying he was honored to be with us and how blessed he felt as he watched us marching. He said it made his “heart soar like a hawk.” He spoke of the many issues he has worked on in his life. And how it takes many, many years to see results (40, more). That it is not the number of people involved that is important. It is their persistence in raising up the truth. Once a certain concern starts to see a shift toward what is right, others remember the people or person who never went away during all those years.

We found there was no cell phone or internet service available in Pilot Mound. In a way that seemed to symbolize that we were cut off from civilization. The whole marching and camping experience felt like we were back in a simpler time. We felt more in touch with nature. We also knew things like the severe storms and flooding we experienced were related to climate change, and to what we were trying to call attention to by marching. 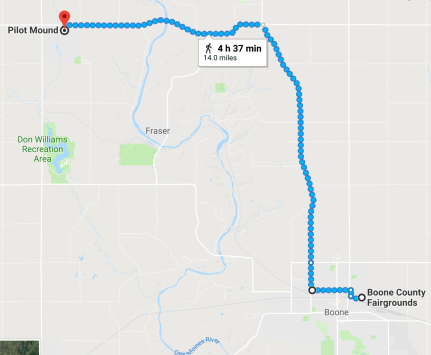