Recently I’ve been learning from Arkan Lushwala how Indigenous people view our world. One of his key messages, which corresponds to what I’ve been writing is that action to help heal Mother Earth is desperately needed now. “Action now is essential. Action is spiritual”.

What action can we take?

There are many campaigns and groups working on social justice problems today. So many that it is hard to figure out which will really be effective, which to join.

One national effort that I have been involved with is the Poor People’s Campaign inspired by a similar 1968 initiative led by Dr. Martin Luther King.

“The Poor People’s Campaign: A National Call for Moral Revival is uniting tens of thousands of people across the country to challenge the evils of systemic racism, poverty, the war economy, ecological devastation and the nation’s distorted morality. We need you to step up and join our efforts. Add your name now if you’re ready to join our movement to transform the political, economic and moral structures of our country.”

Rev. William Barber has been traveling across the country these past several years to build a network of faith leaders and grassroots supporters. I was blessed to be able to attend the event in Indianapolis.  And to attend the Moral Political Organizing Leadershhip Institute Summit.

The Poor People’s Campaign is now set to launch. Tomorrow there will be events at state capitals across the country. You can see if there is an event in your area at https://www.poorpeoplescampaign.org/events/

“This coming Mother’s Day, the Poor People’s Campaign will launch 40 days of coordinated protests, including civil disobedience, in 30 states. On June 23, they will organize a mobilization in the nation’s capital, just as the 1968 campaign did only a couple months after the assassination of Dr. King.”
http://www.resilience.org/stories/2018-05-09/poor-peoples-campaign-gears-up-for-mothers-day-launch/

And the list of demands can be found here:   https://www.poorpeoplescampaign.org/demands/ 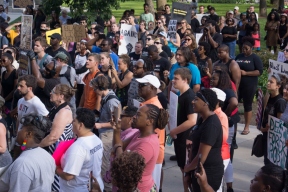