I’ve been writing a lot about the Quaker queries related to civic responsibility, and this one in particular:

How do we share our convictions with others? Do we express our opinions with courage,  yet with love, mindful of the Divine Spirit within everyone?

I’ve been thinking about what my very good friend at the Kheprw Institute (KI), Alvin Sangsuwangul, often says–“What actually changed as a result of _________?”

From the first time I heard him say that (and I’ve heard him say it many times since, and I have begun to say it, too) I recognized how important that question is.

The reason I’m thinking about that now in regard to how we share our convictions with others, is because I think we often forget the sharing part.  None of us enjoy being lectured to, especially since that is usually accompanied by a somewhat superior attitude.

If we take the limited view of sharing our convictions as simply expressing them, and it ends there, I don’t think we are accomplishing much.  What changed?

When I wrote about public vigils, I mentioned that interaction was important.  Debbie’s sign that says “Honk for Peace” does often get passing cars to honk their horns (and pedestrians to say “honk, honk” with a smile).  You know you got that person to at least process, and react to, the message.  Its like the more senses you use, the more impactful the learning.

The best times at the vigils are when people stop and engage with us, either positively or negatively.  I’ve found it helps to look and smile at people as they approach, sometimes saying “Hi”, showing you are open to visiting with them.  But you don’t want to be aggressive about doing so.

It is the exchange that is important, and that might be what does actually cause change.  People want to be heard, and if you show them the respect of actually hearing what they say, and respond to that, I think that might be the only way they might change their own thinking.

mindful of the Divine Spirit within everyone

And of course that is bi-directional.  When others listen to what you say, and they respond to that with questions or challenges, those can make you modify your own thinking.  That is the thing I find most rewarding about public vigils–the challenge to improve how I think, and how I can more effectively communicate my beliefs.

That was especially true when I started to bring signs about things other than peace.  Since we (Quakers, anyway) have been so focused on peace for so long, we don’t often stop to think in new ways about that issue.  But when I began to bring my “STOP KEYSTONE PIPELINE” sign, people would often stop to ask what that was about.  It gave me a chance to not only educate them, but refine my thinking and ways I tried to express that to others.  It also turned out to be a way to finally get some conversations going about climate change, since so many people immediately shut down when you mention those words. 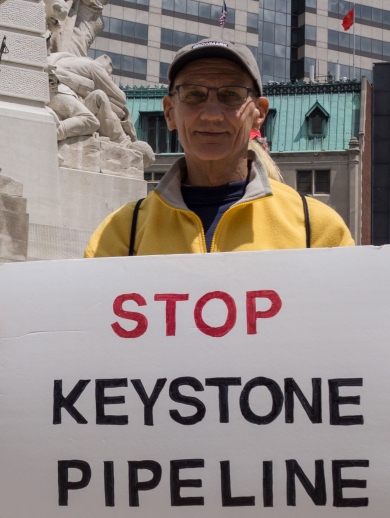 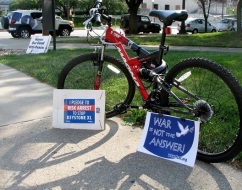 This all became more intense when I began to bring my “Quakers Black Lives Matter” sign. I didn’t know how either people who consider themselves white, or people of color would react.  Not much happened the first time I took it to our weekly peace vigil, other than Gilbert wondering what I was up to now–although our discussions previously about bringing the Keystone sign to the peace vigil helped. 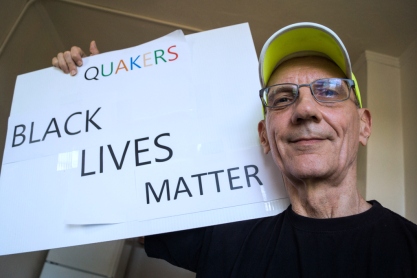 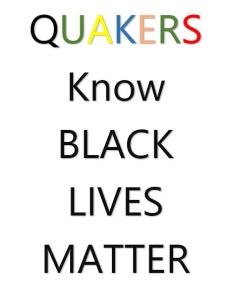 I was really uncomfortable the next week, when I came around the corner with the sign, and found myself in a crowd of thousands of people of color.  It was the weekend of the Indianapolis Black Expo celebration.  Although most people didn’t react, or had puzzled looks, a number did have positive responses.

Why did I do this?  I was led to do it.  For those who aren’t Quakers, what this means is there were several times when I felt nudged or pushed by the Inner Light, or spirit, that this was something I needed to do.  My grandmother, Lorene Standing, said the will of God is often revealed to us in a series of small steps.  Being raised as a Quaker, I heard all my life that there was that of God in every single person, so I was sensitive to the glaring racial injustices found throughout our society and institutions, even though I was raised in rural Iowa.  These things became especially personal when I became friends with those at the Kheprw Institute, and the wider community connected to them.  And when I became friends with a diverse group of young people who formed Indy10 in Indianapolis after they returned from Ferguson, Missouri, when the unrest was going on after Michael Brown was killed.

A young black man parked his car and came up to me and asked that very question, “Why are you doing this?”  His manner was both curious and serious.  I said something along the lines that I felt it was important that white people publicly acknowledge they believe this.  Especially in a time when multiple police killings seemed to be saying that was not so.  After all, who is this message directed at?  I assume black people know their lives matter.  That seemed to satisfy him.  He smiled and shook my hand.  But he also said, “this is a brave thing to do.”  I only mention that to show how others perceive what we do, and to acknowledge to those of you who are considering doing the same that there is the potential for an aggressive response, although I have never experienced that myself.

The few reactions from white people are always “all lives matter”.  But there are usually many cars of people of color who honk (enthusiastically), yell something like “yeah”, and/or very often take photos with their cell phone cameras.

Quaker House, in Fayetteville, North Carolina, has a similar photo.

Here is a link to an interesting article about Putney (Vermont) Friends meeting having their Black Lives Matter sign stolen and a letter they wrote in response.  From their minute on Black Lives Matter: “What’s important for us is that it’s not just a sign, not just a statement, it’s a commitment to join with others in doing the work we need to do.”

I’ve also written a lot about how important the monthly community book discussions at the Kheprw Institute (KI) have been, especially in the relationship between KI and North Meadow Friends meeting (related to Quaker Social Change Ministry).  Imhotep Adisa has called these regular gatherings “revolutionary”–the respectful sharing among such a diverse group of people and ideas.  He also says, “the value of conversation is greatly underrated.”

The core principle of nonviolence is the goal is not to win by defeating your opponent, but rather to genuinely listen to others, knowing there is truth in what they are saying, being willing to change yourself, and moving everyone further along the path to peace and justice.

I believe this is one answer to Alvin’s question, “what actually changed?”  Usually we are changed even as we try to change others.