After recently writing about being in the public square, and signs used in public, I realized the next step should probably relate to how those signs are used, which are usually either displayed in windows or yards, or during vigils and demonstrations.

As I was returning home from our weekly peace vigil in downtown Indianapolis, one of my new neighbors mentioned she liked my (FCNL War is Not the Answer) sign.  I thanked her, and asked if she would like me to get one for her, and she said “yes”.  She wasn’t in when I got one, so I left it at her door.  The next time I saw her she thanked me for it and said she had put it in her (5th floor) window.  The next time I was out I looked up and saw it.

Noah Merrill has shared how the Black Lives Matter sign displayed in the yard of Putney (VT) Friends Meeting has been vandalized.  Some of the Facebook comments related to that indicate some useful discussions can occur when these things happen.  That would be the desired result.  Not just making your own statement, but inviting others to engage in discussion.

As I understand it, a vigil involves standing in public, usually with signs of what the vigil is about, in silence, but willing to engage with anyone who wants to engage.  Vigils are usually held not just once, but on a regular schedule.  The peace vigil held in downtown Indianapolis has been occurring nearly every Friday afternoon since the attacks on September 11, 2001.  The consistency is a message about ongoing concern.  If it is a peace vigil, sometimes participants show the peace sign, and passersby sometimes return the gesture.  Recently Debbie has held a sign that says “Honk for Peace” which receives some response. Demonstrations, on the other hand, tend to occur in response to a more immediate, crisis type of situation.  We have tragically seen this happen over and over again recently in response to police killings, for example.

These days social media is the usual mechanism to let people know the details of a planned demonstration–who, when, where and why.  Social media can also be used to invite those who are interested to gather to plan the demonstration.  For example, people were invited to the White Pine Wilderness Academy the evening before the demonstration in downtown Indianapolis related to the Dakota Access Pipeline to make the signs for the event. 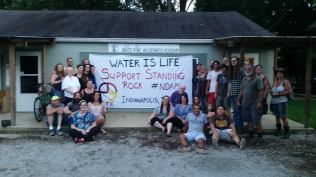 Demonstrations often involve leaders speaking to the crowd, for which a bull horn or public address system is very important if the group is large.

Marches are also often part of demonstrations, usually after the crowd is addressed by people speaking about the issues.  The importance of nonviolence is also usually addressed.

Public safety is crucial for responsible demonstrations.  My experience is that it is very helpful to let the police know about the demonstration, and interact with them the day of the demonstration.  It is somewhat ironic to see the police safeguarding demonstrators marching through downtown, stopping traffic at intersections, especially during those demonstrations related incidents of police shootings.  The Indianapolis Metropolitan Police have always been very friendly and helpful, in my experience.

Trying to get the news media to cover your event is often frustrating, but obviously extremely valuable if you can make that happen.

I don’t know how you can measure what effect vigils and demonstrations have in most cases.  Sometimes there are eventually changes to laws or policies.

But people do pay attention.  For example, one day I was walking through the Central Library on the way to the peace vigil, carrying a War is Not the Answer sign, when a librarian beckoned me over, to ask if I was going to stand in front of the Federal building.  She said she appreciated seeing us there every week.